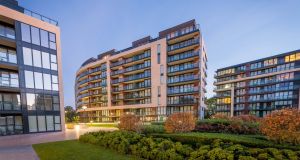 There are 274 apartments across nine blocks for sale at The Grange. 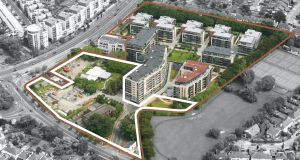 One of the largest residential investments offered for sale in Dublin in recent years along with a further development site may well set a record price when they go on the market from today.

Joint agents Knight Frank and Cushman & Wakefield are guiding €135 million for more than half of the completed apartments and the adjoining site at The Grange in Stillorgan, Co Dublin, which has been under construction since 2004.

For sale at this stage are 274 of the 507 fully completed apartments across nine blocks, ranging in height from five to nine storeys. The sale also includes a highly rated 4-acre site and gate lodge, which are expected to accommodate an additional 263 apartments.

The original 11.3-acre site was assembled by Ray Grehan’s Glenkerrin Homes for around €85 million in 2004. Grehan built and sold 323 apartments before the property crash, when Nama appointed Grant Thornton to finish off two partially built blocks with a total of 174 apartments. These are now for sale along with an additional 100 homes peppered throughout seven other blocks.

The planned sale in a single lot has attracted an unusually high level of interest from investment groups, largely because of its prime location on the Stillorgan Road as well as the style and comfort of the apartments and the attractive rents achieved by investors. One-bed apartments have been renting from €1,400 per month, two-beds from €1,600, and three-beds from €2,220.

The strong bidding expected for the apartment portfolio could well come from at least a half-dozen funds. Among them are Patrizia, which bought more than 300 apartments from the Cosgrave Group in Dún Laoghaire, as well Irish Life, Kennedy Wilson, Hines, Broomfield Residential and Roundtree Capital.

Similarly there is every likelihood of equally strong bidding for the adjoining 3.97-acre development site because of the pent-up demand for apartments in south Dublin.

The selling agents are guiding €105 million for the completed 274 one-, two- and three-bedroom apartments and penthouses, which produce a rental roll of €5.75 million.

Despite the density of the development, the common areas are spacious and monitored by a 24-hour concierge service. Internally, the blocks are laid out with a maximum of five units per core, a dual aspect arrangement and balconies with clear views over the Dublin mountains and Dublin Bay.

The joint agents will be quoting in excess of €30 million for the development site of 1.64 hectares (3.97 acres), including the Gate Lodge, which fronts on to both the N11 and Brewery Road. A feasibility study prepared by OMP Architects suggests that the site could accommodate an additional 263 apartments in six blocks ranging in height from six to 10 storeys, with a proposed newly aligned entrance from Brewery Road.

James Meagher of Knight Frank said the key to the success of The Grange was its quality and close proximity to employment and transport options. It is also strategically located on the N11 just a short drive from Ballsbridge, Ranelagh, Donnybrook and Dublin city centre.