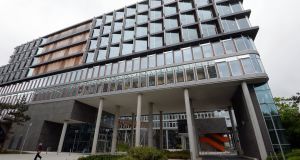 Allianz block at Elm Park: rent roll of €3,961,740 is to be reviewed on upwards-only basis at the end of next year. Photograph: Eric Luke / The Irish Times

Less than four months after buying Elm Park, the vast office and residential development on the Merrion Road in south Dublin, the US investor Starwood Capital Group has sold on one of its office blocks at a considerable profit.

The fund has secured €58 million from Standard Life for the eight-year-old Allianz Plc building which will show an initial return of 6.7 per cent. The off-market deal, which is subject to the approval of the Competition Authority, reaffirms the continuing demand for modern office blocks with strong covenants. One advisor involved in the latest sale estimated that Starwood probably made a profit of “well in excess of €5 million” on the deal.

Standard Life has been particularly active in the investment market in recent years, buying 3 and 5 Custom House Plaza in the IFSC for €24 million; the Cineworld Cinema in Parnell Street for €33.8 million; and Fleming Court office investment at Mespil Road for €17 million.

The Allianz office building is the second element of Elm Park to have been sold by Starwood since acquiring the complex for €184.3 million.

The units are producing an annualised rent of €3.2 million with a 92.5 per cent occupancy rate showing a gross yield of 5.4 per cent. Irish REIT says that when fully let the apartments should generate a gross return of 5.9 per cent.

Interestingly, Irish REIT did not manage to buy a further 17 apartments in a highly rated block on the same site nor eight newly restored Victorian houses at Llandaff Terrace fronting on to the Merrion Road which continue to attract strong rents in view of the shortage of accommodation.

Shortly after acquiring Elm Park, Starwood and Irish developer Chartered Land announced that they planned to spend €35 million on finishing out Elm Park which has an overall site area of 17.3 acres. The priority will be the conversion of the five to eight-storey 16,165sq m (174,000sq ft) Pioneer building which runs along the front of the site. It was originally planned as a 168-bedroom hotel and day care centre and it is now to be fitted out as high quality offices to meet the pent up demand for space. When let it will be expected to bring in an additional €6 million-plus in rental income.

Other improvements will include the fitting out of a sports and leisure centre and the improvement of the existing landscaping.

Starwood is an important investor in the Irish market. An affiliate company is currently developing sites at Windmill Lane in the south Dublin docklands in a joint venture with Hibernia Reit to deliver 11,148sq m (120,000sq ft) of offices.