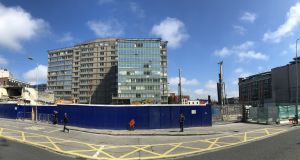 The site on Tara street where the Screen Cinema used to be.

The Dublin Cinema Group (DCG), owners of Dublin’s Savoy Cinema, claim the nature of the planning permission for the redevelopment of the former Screen Cinema site means it will inevitably be used as a cinema or theatre despite a restriction in its 2016 sale that this cannot happen until 2036.

DGC also says it is not looking for more money beyond the €30 million it was paid for the Hawkins Street site by bringing High Court proceedings over the Balark group’s redevelopment plan.

DCG sold it in 2016 to Balark Investments with a restriction in the sale agreement that it could not be used as a cinema or theatre of 20 years. DCG says such a use would substantially impair its interest in the Savoy which is just down the road in O’Connell Street.

In 2017, Balark got planning permission to redevelop it and the adjoining College House as a mixed-use development including a 500-seat “entertainment venue”.

In 2018, DCG brought proceedings against Balark Investments and against another company in the group to which the property had been transferred, Balark Trading GP, seeking, among other things, injunctions preventing Balark implementing its permission and restraining use as a cinema/theatre.

Later, Balark asked the court to strike out or stay the DCG proceedings claiming the were unsustainable, bound to fail and conferred no practical benefit on DCG. The application was opposed by DCG.

Earlier this week, Balark gave an undertaking that a restrictive covenant in the sale agreement with DCG prevents its use as a cinema/theatre and will also applies to any successor in title.

The issue of the implementation of the planning permission remained before the court.

On Friday, Micheál O’Connell SC, for DCG, said at the full trial of the case that his side intended to prove there was no use proposed “that is not a theatre of cinema”.

The drawings and submissions in the current planning permission support this, he said.

In Balark’s own additional information for the planning, it states Dublin City Council’s own local plan for this area is to provide for an “entertainment facility [ie cinema and/or theatre]” not less than that of the Screen Cinema site. While Balark referred to rapidly declining attendances at the Screen before it closed, the company “did not say we can’t put in a cinema or theatre”, counsel said.

A bar in the new venue would only be accessible to those “attending performances” and, as in most theatres, there will be an facility for patrons to pre-order drinks for the interval.

“Balark has set the [restrictive] covenant and the planning permission on a collision course and I intend to prove at trial they cannot do that,” he said.

He disputed what he said was a claim by Balark that DCG “had got €30 million” and wanted more money. “We are not in interested in more money and everyone knew there was a problem when they transferred it to another party and proceeded with the planning application,” counsel said. He said Balark “had created this situation, not us”.

Brian O’More SC, for Balark, said DCG’s entitlements under the 2016 sale agreement “are not remotely diluted” by either the planning permission or the actual building out of the project.

Responding to Mr O’Connell’s claims about the nature of the planning permission, he said what was proposed was a “flexible performance and events space which will be unique to the city” which has the potential for it to be used as something other than a theatre.