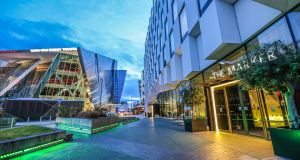 German global real estate investment group Deka Immobilien is closing in on a deal to acquire Dublin’s five-star Marker Hotel for about €130 million.

The sale of the hotel by CBRE follows several reverse inquiries in recent years from prospective purchasers to its current owners, Midwest Holding AG, and an investor group led by Kevin McGillycuddy’s Brehon Capital Partners.

Deka’s purchase of the Marker Hotel comes just two years on from its acquisition for €87 million of the four-star Gibson Hotel at Point Square in Dublin’s north docklands.

In 2016, the German fund made its first foray into the Dublin hotel market, paying US private equity giant Blackstone €182 million to secure ownership of the former Burlington Hotel in Dublin 4.

1 Revenue publishes list of companies tapping State for wage support
2 How long can Government afford to keep State pension age at 66?
3 Trump vs Biden: Stakes are high for the Irish economy
4 107 jobs at risk as Broderick’s shareholder considers examinership
5 Will remote working become the norm?
6 Corporate America is breaking with Donald Trump
7 NatWest CEO declines to give timeline for Ulster Bank decision
8 Stripe moves payment processing to Dublin due to Brexit
9 ‘Going abroad forced me to challenge assumptions that I had’
10 Apple iPhone 12 Pro: Well worth the wait
Real news has value SUBSCRIBE