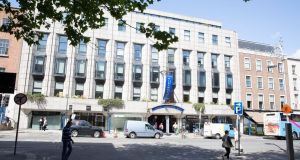 The Royal Hibernian Way: Friends First to invest in improving offering and bringing in additional traders to coincide with Luas arrival

The Royal Hibernian Way, one of Dublin’s almost forgotten shopping malls, is to be upgraded by owners Friends First following its acquisition of the remaining 50 per cent ownership.

News of the planned refurbishment of the Dawson Street enclave comes as the life assurance company is due to confirm its purchase of The Globe Retail Park in Naas for close to the € 26 million guide price.

Friends First has held a 50 per cent interest in Hibernian Way shopping arcade since it replaced the Hibernian Hotel in the early 1980s. The remaining shareholding was subsequently held by various joint venture partners, the most recent being the late David Courtney of estate agents Spain Courtney Doyle. His investment in this and other commercial properties later formed part of the Aspen portfolio of loans sold by Nama for € 200 million. Starwood Capital Group, who bought the Aspen portfolio, sold on the 50 per cent stake in the shopping arcade to Friends First for an undisclosed figure.

Royal Hibernian Way is thought to be valued between €70 and € 80 million even before it is upgraded. It has 18 retail units in all, including the spacious Marco Pierre White restaurant, The Grafton Lounge, Cafe Sol, Danker Antiques, Tuthills, McGuirks Golf, and Designer Jewellery. Office space on the upper floors is all rented by the wealth management group Davy.

Friends First has engaged architects to explore the opportunities for upgrading the shopping mall, which stands to benefit greatly from the decision to locate a main stop directly outside the mall on the new cross-city Luas service. The expectation is that commuters disembarking or joining the Luas on Dawson Street will use Hibernian Way to walk to and from Grafton Street. Pedestrian numbers on Dawson Street are also expected to grow sharply once an ongoing office and retail development by Green Reit on Dawson Street and another office scheme by IPUT on Molesworth Street are completed.

Claire Solon, head of property for Friends First, said there had been limited capital expenditure on the Royal Hibernian Way over the years because of the split ownership. They were now ready to spend funds to improve the retail offering and bring in additional traders to coincide with the arrival of Luas and the other adjoining developments.

Friends First’s move to acquire the entire shareholding in Hibernian Way comes 18 months after it also acquired full ownership of Blackrock Shopping Centre in south Dublin. It previously owned 34 per cent of the centre and bought in the remaining 66 per cent for about € 50 million.

Friends First’s purchase of Globe Retail Park in Naas will give it control of the best performing retail park in the town. The investment will produce a rental income of € 1.7 million and a yield of more than 6.5 per cent. The modern retail warehousing consists of eight buildings extending to 13,290sq m (143,100sq ft). The main tenants are Woodies, Heatons and Smyths Toys.