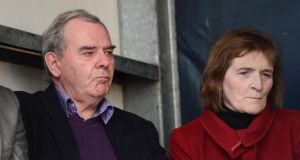 multi-million euro damages over an alleged conspiracy to unlawfully shore up the share price of Anglo.

If the regulator and Minister were not involved, Anglo could not, and would not, have undertaken €2.34 billion loan transactions causing “catastrophic and permanent” damage to the Quinns and the collapse of the Quinn group, it is claimed.

The family claim the defendants were aware, and approved of, some €2.34 billion illegal loans to Quinn companies between September 2007 and July 2008 to fund margin calls on Contract for Difference positions in Anglo shares, causing substantial damage to the Quinns’ shareholdings in those companies.

Mr Justice Peter Kelly yesterday agreed to fast-track the case and approved a timetable for exchange of legal documents. No defendants opposed the fast-track but Maurice Collins SC, for the Central Bank, indicated they may apply to strike out aspects of the claims.

The family want declarations that the defendants conspired to commit illegal acts through breaches of Section 60 of the Companies Act (preventing a company from advancing loans to buy its own shares) and Market Abuse regulations.

‘Breach of duty’ They claim the defendants conspired to procure Anglo to commit the same, allegedly illegal, acts and that the Anglo directors’ authorisation of loan facilities to Quinn Group entities was illegal and/or wrongful.

Damages are claimed for alleged conspiracy, negligence, breach of duty, breach of statutory duty, misfeasance in public office and negligent and/or fraudulent misrepresentation.

Martin Hayden SC, for Mrs Patricia Quinn and her five children, said the application for transfer to the Commercial Court was grounded on an affidavit from Brenda Quinn.

From September 2007 to July 2008, Quinn Group, with the support, facilitation and encouragement of the regulator and Minister, “effectively became a vehicle for the artificial support of the Anglo share price”.

The Minister was aware of the lending as member of Government responsible for financial market stability, expressed through representation on governing bodies, she said. Those included the Central Bank and Domestic Standing Group (comprising Financial Regulator representatives, Central Bank governor and Department of Finance officials) whose task was to overview the financial markets, she added.

Anglo loaned to Quinn companies “until Anglo could lend no more” when it reached the regulatory limit of 25 per cent of its own funds, she said.

Maple 10 In July 2008, when Anglo lending reached 25 per cent, the illegal share support continued, to close out the Quinn CFD position and replace it with actual shareholders, she said. The transaction involved the direct purchase by 10 customers of Anglo, the “Maple 10”, and the Quinns, of some 25 per cent of the entire share capital of Anglo funded by loans from Anglo, she alleged.