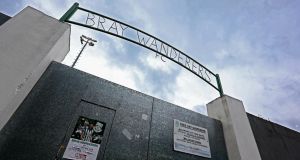 The Carlisle Grounds belong to Wicklow County Council. The club has a lease up to 2036 at a minimal annual rent, which requires that the grounds are used for soccer games. Photograph: Donall Farmer/INPHO

Early on Saturday, July 11th, Denis O’Connor, one of the new owners of Bray Wanderers, got a call from the team kit man, Stephen Maguire. There was trouble at the Carlisle Grounds.

Maguire had gone to the club’s grounds, close to the Dart station in the Co Wicklow town, at about 8am, to prepare for the 5.45pm kick-off against Derry City.

About half an hour later a shareholder and former director of the club, John Deering, turned up accompanied by three other men and two gardaí. He said he was taking charge of the club with immediate effect.

Deering strongly objects to the recent transfer of ownership of the club, suspecting that the new owners are more interested in the commercial possibilities of the Carlisle site than they are in the club. The new owners insist their focus is on the long-term future of Bray soccer. The truth, as is so often the case, may lie somewhere in between.

After getting Maguire’s call, O’Connor, who lives in Delgany, made his way to Bray. He called the Garda and said Deering was unlawfully occupying the grounds. But when the Garda arrived, they found Deering had a copy of a B10 form he had filed with the Companies Registration Office (CRO), apparently showing he had recently been appointed to the club’s board.

O’Connor telephoned the FAI’s League of Ireland director, Fran Gavin, who told the Garda that Deering was not on the FAI’s list of authorised persons for the Bray club.

Eventually a meeting was agreed in a coffee shop, attended by Deering, former Bray goalkeeper Paul Lennon (who says he is owed money by Bray Wanderers), O’Connor

and Kieran Kelly, a solicitor who acts for the club’s new owners.

Deering, who had tried unsuccessfully to organise an EGM to contest the takeover of the club, told O’Connor and Kelly he had filed documents with the CRO registering the resignation of O’Connor and others from the Bray board, and his, Deering’s, appointment. Deering said the documents had been accepted by the CRO and he was now in charge.

Eventually Deering agreed to allow the other men take charge for the day, as the game against Derry would not otherwise go ahead. It did: Bray won by a goal. The following week Bray Wanderers went to the High Court seeking orders against Deering.

Deering, Lennon and a third man have now given undertakings about trespassing on the grounds (though they can attend matches) and the court has been informed that the B10 filings by Deering are to be reversed.

A third aspect to the case had to do with Deering using his B10 appointment to get access to the club’s server and email, and thereby getting access to information which he says supports his view that the club’s new owners are involved in a property play. Deering, who has given a commitment to delete this information, says everything he did was legitimate, given the club’s refusal of his request for an EGM.

To say that Bray Wanderers has been through a difficult patch is to put it mildly, with managers leaving, complaints about players not being paid and now a pricey and embarrassing court outing adding to the picture.

The club’s finances are in a terrible state and there was a danger last year that it would not start this season. It is easy to understand how the former shareholders, people who have supported the club over the years at considerable cost, wanted out.

O’Connor, who knows one of the club shareholders, Philip Hannigan, became involved last year. In late 2014 he got into discussions with representatives of the McGettigan Group, the owners of the Royal Hotel in Bray. By December it seemed they would be the club’s saviours.

A corporate vehicle to facilitate this, Unknowns Football Ltd, was incorporated last

December, and O’Connor, Kelly, Denis McGettigan and Tony O’Mahony, an accountant with the McGettigan Group, were appointed. The group put up €30,000 expecting they would become the club’s majority shareholder.

O’Connor and Kelly were appointed to the Bray Wanderers board last February, with O’Connor appointed chairman. But the planned takeover by the McGettigans began to falter and, according to O’Connor, relations between the two sides fell apart in April. Soon the club was back facing its dire financial situation.

At about this time, by way of his involvement with Wicklow property developer Greg Kavanagh, O’Connor met businessman Gerry Mulvey and learned of his interest in soccer clubs. “He had a look at it and agreed to get involved,” O’Connor says. Mulvey could not be contacted for this article.

On April 27th, Milway Dawn Ltd was incorporated, with O’Connor and Kelly as directors. O’Connor says he owns 20 per cent of Milway, and Mulvey owns 80 per cent. In June, Milway made an offer for the club’s shares and, on July 9th, the board agreed that 92 per cent of the shares would be transferred to Milway for a nominal sum.

The new owners have already invested €50,000 and, according to O’Connor, a further investment of about €200,000 will be needed to put the business on a sound footing.

Mulvey is a former majority shareholder in St Patrick’s Athletic, which has its grounds in Inchicore, Dublin. His involvement in that club ended when he sold his shareholding in 2007 to Garrett Kelleher, the developer behind the Chicago Spire project.

Mulvey is said to have made a significant profit on an earlier involvement in a sports grounds near the Navan Road.

The Carlisle Grounds belong to Wicklow County Council. The club has a lease up to 2036 at a minimal annual rent, which requires that the grounds are used for soccer games.

In a guarantee given to the former shareholders, the new owners say they will seek to develop a three-pitch football centre of excellence in Bray and not seek in any way to acquire the Carlisle Grounds until such a facility has been delivered to the club. Any deal would require the consent of the council.

Meanwhile, Bray playing away to Galway tonight, where a win would make it four in a row.