One of original IFSC office blocks for sale at €37.5m 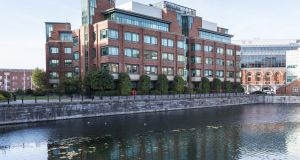 The first office investment to be offered for sale this year in Dublin’s fast-changing IFSC, 3 Harbourmaster Place, goes on the market today with a guide price of over €37.5 million.

Domhnaill O’Sullivan of Savills and Colm Luddy of CBRE are handling the sale for receivers Grant Thornton. Anglo Irish Bank provided the original funding for the investment in 1995 to two groups of high-profile investors, headed by former Anglo Irish Bank chairman Sean FitzPatrick and the late auctioneer and property investor David Courtney.

A considerable number of office investments in the IFSC have changed hands in the last three years as long-term investors availed of the pick-up in the office rental market to offload assets on which they had already claimed 100 per cent capital allowances over a 10- year period.

In some cases the new institutional owners have either upgraded the blocks or plan to do so to cash in on the significantly higher rents now available.

Another of the original office blocks in the IFSC, the slightly larger 2 Harbourmaster Place, was sold at the end of 2014 to Ardstone Capital for €37.85 million in a deal that is showing a net yield of 5.4 per cent.

The building is particularly well located, overlooking George’s dock and close to Connolly railway station, where the transport services include the Dart, Arrow suburban rail and regional schedules and the Luas Red Line.

The top-class office accommodation extends to 4,919sq m (52,094sq ft) over five floors and comes with 41 car-parking spaces at basement level. The office space is fully let, producing a rental income of €2,456,000 per annum.

With a weighted average unexpired lease term of 4.38 years, new owners should be able to take surrenders and refurbish floors to drive rents up further

The design and layout of 3 Harbourmaster Place offers considerable flexibility, with three wings off a central core allowing suites to range in size from 2,232sq m (2,500sq ft) to 1,068sq m (11,500sq ft).