Office space and 40 car-parking spaces in Sandyford for €7m 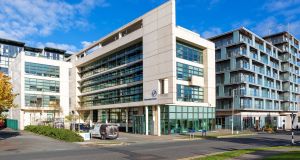 Two fully-let floors and 40 basement car-parking spaces in a modern Sandyford office block are fresh to the investment market at €7 million through Lisney.

Both floors for sale in the block are let to single tenants. Electricity supplier Prepay Power occupies the second floor and UK financial and professional services firm Smith & Williamson is on the third floor.

The weighted average unexpired lease term is just under five years to break option and 12 years to expiry. Rent reviews have recently been completed on both floors and both tenants have just completed refurbishments of their respective space.

The first floor at Paramount Court, also occupied by Prepay Power, came on the market through Turley Property Advisors in June last year with a guide price of €2.9 million to reflect a yield of 8.34 per cent. That floor extends to 808sq m (8,700sq ft) and includes 16 basement-level car-parking spaces.

Paramount Court, a short distance from the junction of Blackthorn and Corrig roads, was built in 2002 and is now fully let. It is close to Beacon Hospital and Beacon South Quarter. The Stillorgan Luas stop is about 500m away while the M50 and N11 are within easy reach by car.

The office block has a high-specification fit-out, including raised floors, suspended ceilings, air conditioning and a mix of open-plan and cellular offices. Shared use of the lifts and stair core provide access to the ground and basement floors.

Smith & Williamson employs 120 people at its Sandyford base and 1,700 worldwide. It posted operating income of £266.7 million (€307.1 million) for the year ending April 2018 and has €22 billion of funds under management. The firm’s Dublin office merged with LHM Casey McGrath in October 2018 and now has a turnover of about €15 million.

Some 140,000 homes use Prepay Power’s pay-as-you-go electricity supply service. For the year ended December 2017 the company posted turnover of €121.8 million.