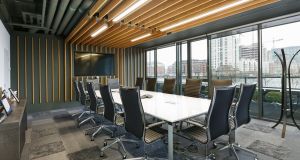 The two suites at South Dock House fit up to 100 staff, with a boardroom for 14

Two high-end south docks office suites – one occupied by Dublin-listed property investment trust Hibernia REIT – are on the letting market at €672.75 per sq m (€62.50 per sq ft) or available to buy for a combined €10.8 million.

Keith O’Neill of BNP Paribas Real Estate, who is handling the sale/letting on behalf of owner Hibernia REIT, says that the combined suites could accommodate up to 100 staff.

They are located on the first floor of South Dock House on Hanover Quay and are accessed via an attractive ground-floor reception area.

Hibernia plans to relocate to the last remaining suite in its 1WML development which is also in the south docklands but closer to the Sean O’Casey pedestrian bridge.

The property trust’s fully fitted-out Hanover Quay suite extends to 524sq m (5,640sq ft) of predominantly open-plan space on the first floor and comes with seven basement car-parking spaces which rent at €4,000 each.

It includes a 14-person boardroom, two smaller meeting rooms, kitchenette and cloakroom facilities. There are floor-to-ceiling windows throughout with views over Grand Canal Dock.

An adjoining suite, accessed via a common lobby area, is occupied by US global investment and advisory financial services firm Guggenheim. It occupies 418sq m (4,499sq ft) on a lease that expires in April 2020 and rents three basement car-parking spaces at €4,000 each.

This may allow an occupier to eventually lease both suites for a combined 942sq m (10,139sq ft).

The suites are above ground-floor retail, and there is residential space on the six floors above.

This part of the docklands is virtually fully developed with the last few sites currently being built out. It is home to many standout names in the tech scene, such as Facebook and Airbnb, and is within walking distance of the Dart and Luas.