Savills engaged to handle the sale of almost 15 acres at Dublin Road, Maynooth 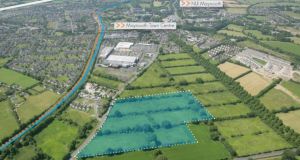 Nama is planning to kick-start large scale housing developments in the greater Dublin area as one way of tackling the shortfall in new family homes.

Under the new strategy, the State property company is to sell ready-to-go sites to construction companies with a good record by way of a licence agreement rather than an initial cash payment based on the value of the land.

Savills has been engaged by statutory receivers Michael McAteer and Gearóid Costello of Grant Thornton to handle the sale of a prime residential site extending to 14.99 acres at Dublin Road, Maynooth, Co Kildare.

The site overlooks the Carton Estate and is within easy walking distance of the town centre. It has planning permission for 136 terraced, semi-detached and detached houses as well as a crèche. David Browne, heads of Savills New Homes, is convinced that once built the houses “would be very saleable” at between €300,000 and €500,000.

Nama’s decision to make the development land available by way of licence agreements underlines the difficulties faced by builders in raising finance to acquire sites and prefund construction. A number of construction companies have been assembling housing sites in the greater Dublin area by using investments from private individuals who can be assured of a considerably better return on their money than is available from the banks.

The Nama criteria for doing business is quite flexible and should include a builder’s ability to pay a non-refundable deposit on the sites, the financial structure to be followed until the houses are offered for sale and the recent track record of the company.

Timing is also likely to be an important factor with the builders expected to be on site within six months and to have at least 40 houses ready for sale within two years.

Though Savills has not put a precise value on the Maynooth sites, the expectation is that they would probably sell on the open market for between €50,000 and €60,000 each – if bank funding was available.

The site going for sale forms part of a larger holding previously owned by the once housebuilding giant McInerney’s, now in receivership.

Nama is planning to provide 4,500 houses and apartments in the Dublin area in the three years up to the end of 2016. Around 1,600 of these units have already been delivered.

Nama has said it will facilitate the sale of sites through receivers under license whereby the purchaser must commit to developing the site within a given time period. A small number of such transactions had already taken place and if the approach worked well on a number of pilot projects it was likely to be adopted more extensively in the future

John Swarbrigg of Savills predicted that the Maynooth site would attract “strong interest” because it had all the qualities of an economically viable scheme in an area where there was a considerable demand for new homes.

1 The wealth of the Irish – how do your assets match up?
2 KBC Ireland fined €18.3m for ‘unconscionable’ tracker scandal role
3 Will Facebook walk away from European market after data protection 'hissy fit'?
4 Dunnes Stores set to enter grocery delivery market
5 Irish company to test vaccines on volunteers deliberately infected with Covid-19
6 Dublin and Cork airports look at setting up pre-flight Covid testing centres
7 Should I switch bank now with Ulster Bank at risk of closing?
8 Bank of Ireland sees more than 1,400 staff apply for redundancy
9 Eir takes on extra staff as ComReg chases it on complaints
10 Appeals put brakes on new 200-bed hotel at Croke Park
Real news has value SUBSCRIBE