Portfolio of loans includes Dundrum, Pavilions in Swords and Ilac in Dublin 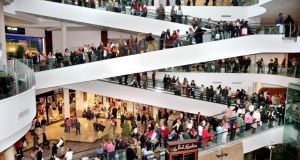 Dundrum centre: a bid from US real estate group Hines and the Kuwait Investment Authority is vying with an offer from Allianz Real Estate and Hammerson. Photograph: Matt Kavanagh

The National Asset Management Agency was last night weighing bids from two groups of international investors for Project Jewel, a portfolio of loans that includes the Dundrum Town Centre, the Pavilions in Swords and the Ilac Shopping Centre in central Dublin.

It is understood that a bid from US real estate group Hines and the Kuwait Investment Authority was vying with an offer from Allianz Real Estate and Hammerson, a UK listed Reit, for the loans that are associated with Irish developer Joe O’Reilly and his company, Chartered Land.

Both parties were waiting to hear from Nama as to who has been chosen as the preferred bidder, with a decision considered to be imminent.

Project Jewel is expected to trade for in excess of €1.6 billion. The new owner is thought likely to work with Mr O’Reilly and Chartered Land on a consensual basis to manage and develop the underlying assets.

There had been five bidders at the earlier stage of the process but Davidson Kempner dropped out while Allianz and Hammerson teamed up with a joint offer at the final offer stage.

No comment was available last night from Nama or any of the parties bidding for Project Jewel.

The Dundrum Town Centre is considered to be the prized asset connected with Project Jewel. It is producing a rent roll of €58 million for Chartered Land, which opened the centre in 2005.

The portfolio sale also includes 50 per cent stakes in both the Ilac and Pavilions shopping centres in Dublin, as well as a substantial site between O’Connell Street and Moore Street that Mr O’Reilly assembled at a cost of €400 million in the years before the property crash in late 2008.

In addition, it includes 5½ acres in the Dundrum Village Centre, which was earmarked for phase two of the town centre. This development was stalled by the economic crash.

A successful bidder could decide to offload its interests in the Ilac and the Pavilions.

In such a scenario, it is likely that Irish Life, which has a 50 per cent interest in the Ilac and a 25 per cent stake in the Pavilions, and Iput, which has a quarter share of the Swords centre, would be interested in acquiring their interests.

Both parties are believed to have pre-emption rights on these stakes.

Nama originally held €538 million of the €775 million in senior debt secured by Dundrum.

Eastdil Secured is selling Project Jewel on behalf of Nama in a process that began in June. Chartered Land’s loans were transferred to Nama in 2009 and 2010.