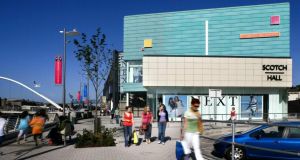 Nama changed the terms of a bidding process that it ran to select the operator of a proposed cinema that the State assets agency is backing without telling at least one of the participants beforehand.

Nama is financing a €20 million development at Scotch Hall in Drogheda, Co Louth, consisting of eight new cinema screens and 50,000sq ft of shops, that is proposed by Edward Holdings, owned by developer Gerry Barret, one of the agency’s larger clients.

The agency selected Edward Holdings Eye Cinema subsidiary, after an independent process that it ran in mid 2012, which attracted five bids. The decision means that Nama is backing both the development of the property and the actual cinema business itself.

According to one of the unsuccessful bidders, the agency changed the terms midway through the process. It claims it had originally expressed interest in the cinema, and was told that it would have to go through an independent process overseen by Pricewaterhousecoopers.

Bidders were told that offers to rent or buy the cinema would be considered. However, at an interview in Pricewaterhousecoopers’ Dublin offices in June 2012, one company that had expressed interest in buying the cinema was told the agency would only consider offers to rent the facility.

“We were told they would consider either purchase or rental, and to put our best foot forward, whichever one we preferred,” of the company’s managers said, adding that his business bid to buy the cinema.

He added that this put his company off the deal as it was only interested in buying the cinema.

Nama refused to comment beyond a statement it issued last week saying it was satisfied with theindependent bidding process and its outcome.

A rival to Edward Holdings, Melcorpo, has already converted unused shopping space at its Drogheda Town Centre development into eight cinema screens, with more than 800 seats, and plans to open in June.

Melcorpo warned recently that the Scotch Hall complex would result in an oversupply of cinema seats in Drogheda. Its plan would bring the total in the Louth town to over 1,240, as there was an existing theatre with 447 seats. Scotch Hall would add 1,184 seats.