McKillen companies get court order on size of basements 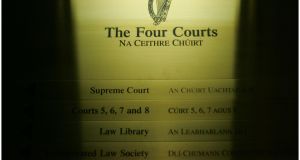 Among the companies concerns was that the policy introduced measures which would have “significant impact” on basements and underground development, particularly a requirement that basements are set back 0.5 metres from the boundaries of the relevant site.

That would affect the commercial viability of a number of developments being considered by the companies, they claimed. Ingaro Limited and May Property Holdings brought a judicial review challenge over the council’s decision on January 31st last adopting a basement development policy document and a basement development guidance document.

When the case came before Mr Justice David Bairnville at the Commercial Court on Tuesday, he was told by Jarlath Fitzsimons SC, for the applicants, the matter had settled and orders could be made on consent. Stephen Dodd SC, for the council, confirmed its consent.

The judge congratulated the sides on reaching a settlement and made the agreed orders, including one quashing the January 31st decision.

He also granted a declaration that, in adopting the policy and guidelines, the council acted in excess of its powers and erred in law with the result the impugned decision is invalid and of no legal effect.

An additional order requires the council to pay the applicants legal costs. In their action, the companies said the Dublin City Development Plan 2016-2022 contains a number of policies concerning the development of basements. A basement impact assessment policy document of February 2019 appeared to introduce a new policy to formalise planning requirements for all below ground structures, basements, regardless of their function.

That document indicated the new policy would introduce the requirements of basement impact assessments for all below ground structures, with the associated costs to be borne by developers. The content of an assessment was also to be made a “material” consideration in the planning application process.

They alleged the council had failed to identify the source of its purported power to adopt the disputed policy on January 31st, 2020 and it lacked such power. The companies also alleged the council made a material error of law in adopting an “inflexible” policy requiring, in relation to all basement development, there must be at least 0.5 metre width between the site proposed boundary and the outer extent of the proposed basement.

Other claims included the council had adopted the policy without any public consultation or consultation with affected parties in breach of the applicants constitutional rights and their rights to fair procedures.

1 Why are markets booming when a crash is on the way?
2 How much do Irish people earn? And what will Covid-19 do to our wages?
3 Dunnes Stores trials online ordering from Cornelscourt outlet
4 Could your old car be giving away all your secrets to its new owner?
5 Up to 400 jobs saved in Cavan as MML takes stake in CG Power Systems
6 Permission sought for €150m film and media campus in Wicklow
7 Covid-19: Publicans and restaurateurs row over calls for VAT cuts
8 Galway Clinic gets orders dismissing action over board decision
9 AIB U-turn on mortgage block for those on Covid wage subsidy
10 Irish travel-tech company Rove raises €450,000 in seed funding
Real news has value SUBSCRIBE