Order made as Katarzyna Kryzaznowska says she invested €40,000 in firm on false pretences 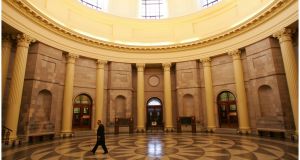 The High Court has appointed a provisional liquidator to an Irish-registered luxury property investment firm operated by an alleged fraudster.

The order was made in respect of Lux Estate Capital Limited, with a registered address at Townspark, Trim Road, Athboy, Co Meath, which purports to be involved in real estate investments in various countries, primarily in Spain.

After living in Ireland, where he worked for a courier company, he moved to Spain last year.

It is alleged that he used Lux “as a vehicle to procure monies by way of bogus investments in property”.

The High Court heard that following representations from Mr Salamander fellow Polish national Katarzyna Kryzaznowska invested €40,000 in the firm on false pretences and claims to be a victim of “a fraud”.

She sought the return of her investment, but when her monies were not repaid, she petitioned the court to have Lux wound up.

Insolvency practitioner Myles Kirby was appointed as provisional liquidator to the company by Ms Justice Leonie Reynolds this week, after the court was told Lux was insolvent and could not pay its debts as they fall due.

Arising out of the court’s order, Mr Kirby will take control of the firm’s assets, including its bank accounts, as well as its books and records.

Ms Kryzaznowska, who lived in Ireland for many years before returning home, was represented in court by Arthur Cunningham BL, instructed by solicitor Peter Boyle.

Counsel said his client became acquainted with Mr Salamander when they both lived in Ireland.

He represented to her that he enjoyed significant financial success and that Lux was worth more than €7 million. It was claimed that at the time he made those representations Lux did not exist or was newly incorporated.

It is claimed that earlier this year Mr Salamander offered her an opportunity to invest in Lux, counsel said.

As part of the deal, she received documentation from Mr Salamander and was promised monthly payments of €4,000, counsel said.

However, she only received one payment of €2,500. Records from the CRO said the company was incorporated in May 2020 and records show the valuation was misleading.

Mr Salamander told her that Lux had delayed making payments due to Covid-19, and that the firm’s bank account had been frozen by the Revenue Commissioners, counsel said.

While Mr Salamander told her that Lux was cancelling its arrangement with her, and made assurances that payments had been made to her account, Ms Kryzaznowska has not received the money from the company and her financial circumstances have been badly affected.

As a result, she has petitioned the court seeking the appointment of a liquidator to Lux.

Mr Boyle said he also discovered that Mr Salamander has “a reputation for defrauding purchasers of tickets for music festivals” in Poland.

The festivals, Mr Boyle said, would be set up by Mr Salamander only to be cancelled at the last minute without monies being returned to the ticket buyers.

Mr Boyle said that Mr Salamander uses various online platforms “to procure monies by way of bogus investments in property” as he did with Ms Kryzaznowska.

Mr Boyle said that Mr Salamander has recently posted on his Instagram account that he has 300 members in Lux, and that investors receive 8 per cent annual returns on their investments.

Mr Boyle added that Mr Salamander appears to have used the image of billionaire businessman Elon Musk to advertise Lux.

Mr Boyle said that Mr Salamander lists certain properties for investment opportunities, including an exclusive new-build villa worth €2.9 million, on his LinkedIn profile.

Mr Boyle added that Mr Salamander described himself on his LinkedIn profile as being a successful entrepreneur in areas such as marketing and transport, as well as having a long career in the music industry and having founded his own music label.

Mr Boyle added that Mr Salamander also states in his profile that his true passion is for real estate and he founded the Lux group to “dominate” that market and “change the way of investing in luxury real estate forever”.

This, Mr Salamander further claims in his profile, would be done by transforming private luxury villas into successful holiday rentals, with the aim of selling them for profit to “professional investors as cash-flowing businesses”.

The judge made the matter returnable to a date in December.

7 Central Bank has sold off 72% of IBRC-linked bonds