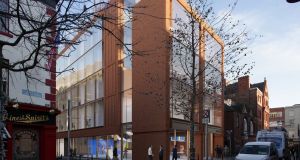 Lioncor is on course to secure more than €40 million from the sale of the redeveloped Chatham House to the European Parliament.

While the deal for the Dublin city centre property has yet to be completed, the Irish developer, which is headed up by John Maxwell, is in the process of delivering a new six-storey building on Chatham Street which will be occupied by the European Commission’s representation and European Parliament liaison.

Having purchased Chatham House for a reported €10.6 million in 2019, Lioncor looks to be in line for a significant return on its original investment even after the estimated €20 million cost of developing the EU’s new Dublin premises is factored in.

The “House of Europe”, as it will be known, will extend to a total area of 3,065sq m (33,000sq ft). Some 1,425sq m (15,338sq ft) of the building will be given over to office use on the second, third, fourth and fifth floors, while the remainder of the accommodation will be devoted to a visitors’ centre known as the “Europe Experience”. This is set to include several multimedia stations and a 360-degree cinema at basement level which will allow visitors to experience a plenary session of the parliament or take part in a role-play game as a member of the parliament or as an EU commissioner.

The EU parliament’s decision to move its Dublin offices to Chatham Street is understood to stem from its wish to base itself closer to the city centre to be in a better position to promote the European project. The House of Europe, or Chatham House as it was known previously, is located just metres from Grafton Street and the Westbury Hotel while the commission’s representation and parliament liaison office are currently situated on Mount Street.

Prior to its acquisition by Lioncor, the Chatham House site had been sold previously in 2003 to a company that formed part of developer Bernard McNamara’s empire. It is believed that Mr McNamara spent €12.7 million acquiring the landmark 0.05 hectare (0.13 acre) property including purchase costs. Following the property market’s collapse Nama appointed a receiver over the site in 2011.

Apart from its involvement in the Chatham House development, Lioncor is best known as one of Ireland’s biggest house builders. Established in 2018, the company’s current portfolio of sites gives it the capacity to deliver in excess of 10,600 new homes nationally over the coming years.

In Dublin alone, Lioncor owns prime apartment sites in Ballsbridge, Blackrock, Dundrum and Cherrywood, and is set to lead the delivery of the 3,500 residential units being planned as part of the redevelopment of the former Irish Glass Bottle site in Ringsend.