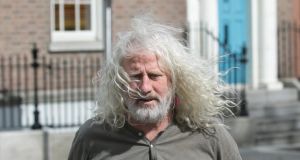 The Law Society of Northern Ireland (Law Society NI) last night issued an appeal to Independent TD Mick Wallace and “any other person with relevant information” relating to his allegations concerning the sale of Nama’s portfolio in the North to pass it on to the PSNI or Garda Síochána.

The society, the regulatory body for solicitors in the North, said it is continuing an inquiry into “the circumstances” which led to the resignation of Ian Coulter, a former managing partner from the Belfast law firm Tughans, in January 2015.

The Belfast firm said it voluntarily contacted the Law Society to inform them of the circumstances which led to Mr Coulter’s departure. Mr Coulter had, according to Tughans, “diverted to an account of which he was the sole beneficiary professional fees due to the firm without the knowledge of the partners”. The account is alleged to have held £7 million (€9.83 million).

On Tuesday, the PSNI said no formal criminal investigation is under way in relation to Mr Wallace’s allegations.

Remained on the roll

The Law Society disclosed that Mr Coulter had not renewed his practising certificate in January 2015 and, as a result, was no longer practising as a solicitor in the North. But it said Mr Coulter remained on the roll of solicitors and was subject to investigation by the society.

The organisation said while it has the powers to undertake investigations into financial matters within solicitors’ firms, it “does not have a wider remit to investigate individuals who are not solicitors . . . The Law Society will co-operate with any police investigation into these new and serious allegations which are beyond the remit of the Law Society’s powers . . . Upon conclusion of its inquiry, the Law Society shall take such action as is appropriate which may include referral to the independent solicitors’ disciplinary tribunal empowered to impose financial penalties and/or striking off solicitors . . .”