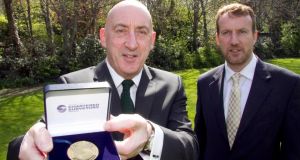 
Investors and policymakers are basing decisions on property and construction on either “no information or the wrong information” according to former National Asset Management Agency (Nama) executive John Mulcahy.

Addressing the Society of Chartered Surveyors yesterday, Mr Mulcahy, former head of asset management with Nama, pointed out the Republic has no coherent set of data that tells people in real time what is happening in the property and construction markets.

“We are making decisions on property on the basis of no information, wrong information or information that is out-of- date,” he said. He added that despite being a small country with just 4.5 million people, we still don’t know how many houses we need and where to build them.

Mr Mulcahy said that while any proposal for any policy should be evidence-based, “we do not have data from which we can launch evidence-based propositions in relation to property and construction”.

He was receiving the society’s gold medal, which recognises people who have contributed significantly to the property and construction sector.

Mr Mulcahy qualified as a chartered surveyor in the 1970s. Before working for Nama, he was chief executive of Jones Lang LaSalle Ireland.

He pointed out that even as the Republic began to emerge from the crisis sparked by the last property bubble, estimates of the number of vacant homes in the State varied between 70,000 to 300,000.

He called for a system that – using information such as loan- to-value ratios or price-to-value ratios – would at least help to indicate that something was going wrong in the market.

Market vagaries
“If we had such data it would not stop the vagaries of the market, but it would allow us to build up a margin of error or a margin of safety,” he said.

Mr Mulcahy added that it might not stop people buying blindly at the top of the market and selling at the bottom, but it could ease the impact of the two extremes of the property cycle.

“If we know at any point where we are on the curve, at least a proportion of people will make the appropriate decisions,” he argued.

“I am not arguing for forecasting the future, I am arguing that we need to know where we are now,” he said.

He went on to warn that investment and policy decisions had to be made on those terms, otherwise they were based on clichés.

“I would not buy anything on the basis of cliché and yet property is bought and sold on that basis,” he said.

“We have just come through a rather bad time and we could march ourselves into another,” he warned.