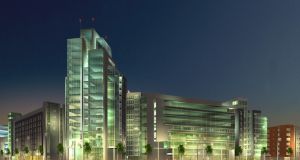 Notwithstanding the uncertainty created by the Covid-19 pandemic in both the commercial property market and wider economy, the proposed upcoming sale of a landmark nine-acre site in Dublin’s north docklands is likely to generate strong interest from a range of developers and international investors.

Assembled by a joint venture involving Christopher Bennett of the Westmeath-based Bennett Group, the Merchants Gate site, as it is known, is expected to be offered to the market at a guide price of up to €100 million. The Irish Times understands Savills Ireland has been engaged by the site’s owners to advise on the proposed sale process.

Located almost immediately opposite the entrance to the Dublin Port Tunnel and within close proximity to the 3 Arena, Point Square and the Eastlink Bridge, the Merchants Gate site is zoned for the delivery of a major mixed-use scheme.

In 2004, the site’s owners submitted a planning application for a massive development which was to have included 721 apartments, a four-star hotel with 200 bedrooms, a 20-suite boutique hotel, 38,000sq m (409,000sq ft) of mainly offices, social and affordable housing, a gym, swimming pool, shops, a community care centre and crèche. The 102,000sq m (1,100,000sq ft) development also included a proposal for a 19-storey tower block as its centre piece. Rising to a height of 65m (213ft), the building was intended by the developers to act as a key gateway to the city.

In 2006, agents acting on behalf of the Bennett-led joint venture offered the site for sale with full planning permission for an 83,773sq m (901,725sq ft) mixed-use development. The approved scheme, which included the 19-storey block, was expected to secure upwards of €150 million.

Although the proposed disposal of the Merchants Gate site did not proceed, the attention of the market was drawn soon after to the sale by Dublin Port Company and shareholders in South Wharf (formerly Ardagh plc) of the former Irish Glass Bottle site in nearby Ringsend.

While the 25-acre site was expected to secure in the region of €300 million, it ended up securing €412 million from Becbay Ltd, a consortium involving developer Bernard McNamara, financier Derek Quinlan and the now-defunct Dublin Docklands Development Authority (DDDA).