Developer’s scheme will be largest Dublin office development since crash 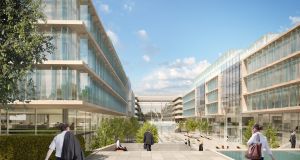 Computer-generated image of the proposed offices at the AIB Bankcentre. The promoters say the scheme will have a development value of about €350 million.

Irish property developer Johnny Ronan is to seek planning approval for the largest Dublin office development since the property crash. The proposed scheme, planned for the front of AIB’s Bankcentre in Ballsbridge, will have an overall floor area of 32,438sq m (349,159sq ft) and a development value of about €350 million, according to optimistic projections from the promoters.

The Ronan Group is to get senior debt funding for the project from US-based Jefferies Loan Core while mezzanine finance will be available from another American finance house, WLR Cardinal Partners. Cardinal and Wilbur Ross made a significant profit in recent years from their investment in a €1.4 billion equity placement by Bank of Ireland which kept the bank out of majority State ownership.

The Ballsbridge site opposite the RDS is easily the best located in the city and when the new offices are completed towards the end of 2018 they are expected to be of interest to both overseas and Irish-based companies looking for a prestigious Dublin headquarters. In recent months there has been considerable unease about the shortage of high volume, modern office space in the city and the effects that might have on incoming US direct investments.

The Ronan Group purchased the site last July for €67.5 million, a long way from the €200 million price paid for it in 2006 by property developer Sean Dunne.

The central plaza is to be retained in the new campus-style layout proposed by the Ronan Group. Architect Paul O’Brien of HJL, who designed the six-storey blocks, said the plan was to create a visual interplay with the existing semi-mature trees on the site. “Vertical glazed fins and strong horizontal stone elements will serve to break the form of the structures and integrate the buildings further with the greenery of the site. This approach is intended to create a fluid appearance for the building, allowing it to reflect both the changing skies and foliage as the seasons come and go.”

O’Brien said the central plaza was designed as a more inclusive and active space than exists today. By lowering the plaza it would greatly enhance the environment for all occupiers working on the overall campus. “Taken together, we believe these design features combine to create a truly striking proposal which is both sensitive to the existing context and a valuable addition to the urban fabric of Ballsbridge.”

Shane Whelan, development director with the Ronan Group, said they would be delivering a premium quality building in keeping with the high standards set over the past 30 years with projects such as the Google European HQ, Connaught House on Burlington Road and PwC headquarters in Spencer Dock.

Declan O’Reilly said that as letting agents they have already been approached by a number of “significant occupiers” looking at the possibility of securing space in the new development.