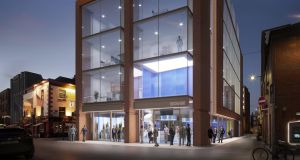 An artist’s impression of the Chatham House development.

Irish housebuilder Lioncor Developments has received planning permission to develop its Dublin city centre Chatham House project into a six-storey “house of Europe”, which will be occupied by the European Commission representation and European Parliament liaison here.

The developer, led by chief executive John Maxwell, received permission this week for the development on Chatham Street, just metres from Grafton Street and the Westbury Hotel.

Previously, retailer Great Outdoors, a supplier of outdoor clothing and equipment, was based in Chatham House for more than four decades until relocating to South Great George’s Street.

Lioncor will build the six storey over basement project to include an interactive multi-media exhibition area on the ground floor and in the basement. It is understood that the commission representation here wanted to move closer to the city centre to be in a better position to market the European project. At present, the commission representation and Parliament liaison office are based on Mount Street in Dublin 2.

The plans approved by Dublin City Council will see construction of 1,425sq m of office space on the second, third, fourth and fifth floors with tiered roof terraces facing onto Chatham Street on the top two floors.

The building will feature a visitors’ centre known as “Europe Experience” to include several multimedia stations while the basement will house a 360 degree cinema to allow visitors experience a plenary session of the European Parliament or take part in a role-play game as a member of the parliament or as an EU commissioner.

Lioncor acquired the building last year for a reported €10.6 million. The site was last sold in 2003 to a company that formed part of developer Bernard McNamara’s empire. It is believed that Mr McNamara spent €12.7 million acquiring the landmark 0.13 acre property including purchase costs. Following the property market’s collapse, Nama appointed a receiver over the site in 2011, who went on to secure planning permission in 2015 for 14 apartments, a retail unit and restaurant on the site.

Aside from Chatham House, Lioncor’s portfolio includes prime apartment sites on Merrion Road, Ballsbridge, and in Dundrum; a new housing scheme on Taney Road, Dundrum; and a boutique housing development named Condor on Killiney’s Church Road. The company is backed by Oaktree Capital.