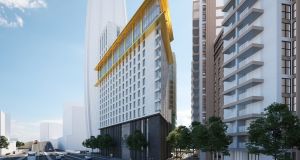 A computer-generated image of the new Staycity and Premier Inn development.

Irish aparthotel group Staycity will add another location to its portfolio as part of a £203 million (€233 million) regeneration of London’s Paddington.

The group, in which property veteran Stephen Vernon has taken a 5 per cent stake, will operate 248 rooms at the development when it is completed in 2021.

Staycity, which offers short-term and long-term apartment and aparthotel lettings, was founded in 2004 by Tom Walsh and his brother Ger, starting with a single apartment in Dublin’s Temple Bar, a former recording studio used by U2.

The company runs its own properties, and last year moved into creating purpose-built serviced apartments under the Wilde brand. Staycity currently has more than 7,000 apartments in its portfolio, although not all are operational. Those are based across major European cities including Dublin, Edinburgh, London, Lyon, Paris and Marseille.

The company’s properties are comprised of studios, one-bedroom and two-bedroom apartments.

“We are delighted to be part of this exciting development opportunity,” Mr Walsh said, describing the Paddington development as “London’s gateway to the west”. In addition to Staycity, Whitbread – which owns the Premier Inn brand – will take 372 rooms at the development on the same terms as the aparthotel owner.