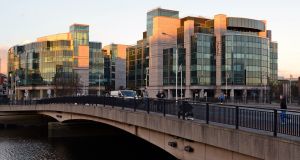 IFSC: Mr Kavanagh joined forces with McInerney Properties and British Land in the late 1980s to build the first phase of the IFSC. Photograph: Dave Meehan

Hibernia said yesterday that it has taken up its option to take full ownership of Hardwicke House and Montague House on Hatch Street on the city’s southside from Mr Kavanagh’s Hardwicke group for €41.8 million.

The trust paid an initial €18.2 million for operational control of the properties in 2014 in a deal that gave it the option of acquiring full ownership for a total of €60 million by the middle of this year.

Mr Kavanagh joined forces with McInerney Properties and British Land in the late 1980s to build the first phase of the IFSC after winning a £250 million development contract for the project in 1987 from the minority Fianna Fáil administration led by Charles Haughey.

The developer donated money to Fianna Fáil a number of times and in 2001, a tribunal inquired into a £100,000 payment from the Customs House Docks Development Company, in which he was an investor, to Mr Haughey, around the time of the 1989 general election.

The Hatch Street buildings’ tenants include financial group, Prudential, accountants Deloitte and services business, Capita. The rent is €2.7 million a-year, but Hibernia said 90 per cent of this is subject to review by the end of 2018.

Hibernia’s chief executive, Kevin Nowlan, said that it was pleased to have taken full ownership of the buildings.

Separately, Bank of New York Mellon has told Hibernia that it intends to leave one of the trust’s other properties, the Hanover Building, by the end of this year. The bank is currently paying €1.4 million for the 44,000 sq ft (4,100 sq m) that it occupies, which is below current market rents. Hibernia is reviewing its options for the building.