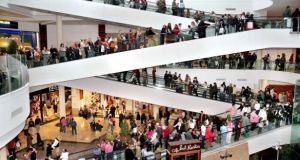 Shopping centre operator Hammerson on Wednesday appointed AIG executive James Lenton as its new finance chief, months after saying Timon Drakesmith would step down from the role this year.

Mr Lenton, whose LinkedIn page says he was chief financial officer of the US insurer’s EMEA business and its European Group until June, will take over the role from October 1st.

Hammerson and its peers are struggling with a tough retail environment in Britain, which has seen several high-profile chains close in the last year as consumer habits change and Brexit worries quell spending by shoppers.

Its latest earnings report showed a more than 12 per cent drop in net rental income for the first-half and its stock price has plummeted as much as 35 per cent since it spurned a £5 billion (€5.4 billion) takeover bid by rival Klepierre last year.

The company, which part owns Dundrum Town Centre, also walked away from a deal to buy smaller rival Intu Properties in the first half of last year.

1 Getting out from under ‘never-ending’ Celtic Tiger debt burden
2 Brittany Ferries ends Cork-Santander route
3 Pensions: Estonia plans to unleash a potential €4.85bn on economy
4 Explainer: what is the row about SF’s multinational tax plan?
5 Britain after Brexit will not be alone, but it will be lonelier
6 Banks withdrawing from ATMs – another failure of regulation
7 Fair Deal nursing homecare leaves little for bills and gifts
8 Brittany Ferries announces new services to Spain and France from Rosslare
9 Money matters: ‘My father embarrassed us with his haggling’
10 More affordable iPhone 11 is unlikely star of Apple earnings
Real news has value SUBSCRIBE