House in top Dublin location with potential for various uses 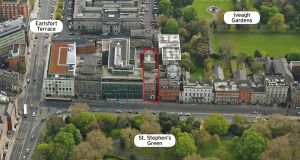 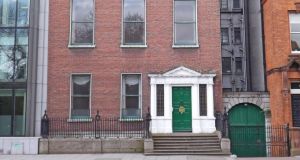 Number 77 St Stephen’s Green is a four-storey, over-basement building to the front with a three-storey extension to the rear

One of the great Georgian houses on Dublin’s St Stephen’s Green, owned by the Loreto Order since 1911, is expected to attract considerable interest from private investors and commercial developers when it goes on the market today.

Loreto Hall at 77 St Stephen’s Green was originally used as a university hostel and for the last 15 years has accommodated the dwindling Loreto community.

Donal Kellegher of DTZ Sherry FitzGerald is now guiding €5.75 million for the house which is on the south side of the square next to the modern office building at number 75 which replaced the Department of Justice.

The Loreto nuns have had a long association with St Stephen’s Green, having run the renowned school for girls at number 53 since 1821.

Number 77 is an impressive four-storey, over-basement Georgian building to the front and a three-storey extension to the rear with an overall floor area of 1,900sq m (20,451sq ft).

The house retains most of its Georgian features including an elevated entrance, original cornicing, a keynote staircase, chandeliers and sash windows.

The main building is well proportioned with large reception rooms with potential to refurbish or convert the rear block into any number of uses. One of the unusual features is a side garage with vehicular access from St Stephen’s Green.

Kellegher said number 77 offered one of the last remaining opportunities to convert “an original, uncompromised Georgian building” on Stephen’s Green to a number of high-value uses including residential, offices, guesthouse and other commercial uses such as an embassy or hotel.

1 Should my mam wait for house prices to drop before buying?
2 US ‘hard seltzer’ drink White Claw launches in Ireland
3 Donohoe told insurers they risked ‘irreparable damage’ to reputation
4 Chris Johns: Past is another country when it comes to our post-pandemic future
5 ‘The recovery needs to be a full-scale economic renewal’
6 Citigroup warns that markets are out of step with reality
7 ‘I’m so lucky to be in the Caribbean – a million miles from Derry Girls’
8 Tobacco makers still trying to make a mint from Irish menthol market
9 Charlie Chawke plans 290 apartments and hotel on Goat pub site
10 Household savings soar as consumers stop spending
Real news has value SUBSCRIBE