Large-scale investors: the cause or the solution to our housing woes?

The tallest residential building in Ireland is now available for occupancy with a two bed apartment costing €3,300 a month and penthouse suite costing €20,000. 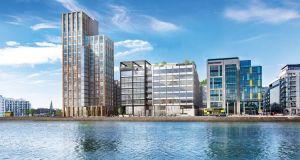 Investors like Kennedy Wilson and Carysfort Capital are setting new rental highs in the docklands, with rents ranging from €3,300 at Capital Dock for a two -bed apartment and from €3,700 at Opus on Hanover Quay.

For the second time in three days, we’ve had a report suggesting institutional investors in the property market far from being the villians of the peace may in fact be the solution to the State’s housing woes.

A Davy report suggests the noticeable slowdown in house price inflation, a product of the Central Bank’s tough mortgage lending rules, has merely resulted in the transfer of housing demand and therefore price pressure to the rental market, as evidenced by rocketing rents in Dublin and elsewhere.

Institutional investment – led by the likes of Kennedy Wilsons whose Capital Dock development in Dublin’s docklands charges in excess €3,000 a month per apartment – has grown in response. The Davy report notes there were €1.1 billion of transactions last year, up from €200 million in 2017.

While this represents a sizeable jump, it still only account for 30 per cent of investment in the private rented sector here and therefore couldn’t been the prime driver of rental inflation.

In contrast to much of the current commentary about “cuckoo funds” crowding out would-be buyers, the report suggests the arrival of these funds are a natural response to several years of chronic undersupply and that ultimately they’re the only guys in town capable of funding the large-scale development required.

The report’s central thesis echoes an AIB report, published on Friday, which suggested that the presence of institutional buyers is the primary reason why large-scale standalone apartment blocks are being built.

The AIB report says that, currently, the construction of large-scale apartment schemes outside of Dublin is not, for the most part, viable. “Without the presence of institutional buyers of apartment blocks in the private rental sector, the viability issue would be even more pronounced and the supply of new apartments would be even lower,” it says.

Davy and AIB may have a vested interest in dampening the bad press being shovelled at these investors after all they do a lot of business in this area - but that’s a petty point to make and some of the arguments around supply and scale are reasonable.

While it’s correct to say institutional investors only command a minority stake in the market – holding less than 5 per cent of all tenancies according to official Department of Finance statistics – they are buying up much of new stock, however, suggesting their influence is bigger than the data suggest.

It could also be argued that the bigger investors have a greater propensity to set market rents, as many of the new developments they fund and acquire are exempt from the Government’s rent controls.

Investors like Kennedy Wilson and Carysfort Capital are setting new rental highs in the docklands, with rents ranging from €3,300 at Capital Dock for a two-bed apartment and from €3,700 at Opus on Hanover Quay.