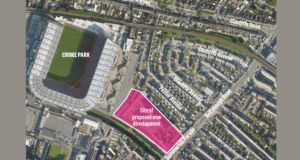 Final negotiations to close a deal on the sale of public land for major new development at Croke Park will be held tomorrow. 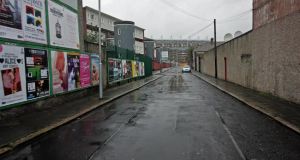 Final negotiations to close a deal on the sale of public land for major new development at Croke Park will be held tomorrow.

The GAA wants land owned by Dublin City Council to create a new “processional boulevard” entrance to the stadium, along with offices, restaurants, shops and handball facilities.

The land is currently occupied by part of the Croke Villas estate, a 1960s flat complex on Sackville Avenue which was to have been regenerated under a public-private partnership agreement with Bennett Developments.

Those plans collapsed in December 2008 and just nine of the 79 flats are occupied. The regeneration of the complex, which involves demolishing the dilapidated flats and building 44 new homes on a portion of the site, would be funded by the land’s sale to the GAA.

The GAA’s involvement in the regeneration project was first proposed more than four years ago and the council has been negotiating the purchase price since early 2012.

Executive manager of the council’s housing department Gerry Geraghty said a “firm proposal” had been made by the council’s valuers to the GAA last May and the council was expecting an answer tomorrow.

“There will be a meeting on Thursday, the 11th, to try to bring this to a close.” The sum to be paid would be a “sizable contribution” he said. “I’m not going to put a figure on it before that meeting . . . but there is a lot of money on the table here”.

Partnership with the GAA represented the only realistic chance of regeneration for Croke Villas he said and it would be “foolish” of the council to ignore the offer.

However, he acknowledged the process had dragged on too long. “On Thursday I will be pushing to try to get agreement straight away.”

This would become the only match-day entrance and would take crowds out of surrounding streets.

The residential element would be relocated away from the road and a new “urban village” would be created which could encourage local enterprise with elements such as a dance studio or artisan bakery. The development would allow for the expansion of Croke Park’s office facilities and a handball centre.

After a lengthy planning process, in 2012 the GAA secured permission to demolish the 1970s handball facility and community centre and build a new expanded centre, with 500sq m of office space in addition to sports, recreation and community facilities.

The plans were opposed by several groups.

These included the occupants of the existing community facilities, represented by the Croke Park Streets Committees, principally on the grounds that bar facilities in the handball centre would not be replaced in the new centre.