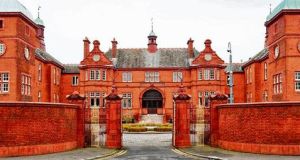 One of Dublin’s most notable landmark buildings, the former Richmond hospital on North Brunswick Street, is for sale at €3.5 million through the Space Property Group.

The redbrick complex housed five of the Dublin District Courts until the new Criminal Courts of Justice opened on Parkgate Street in 2011.

Dublin businessman Rory O’Meara has managed to find tenants for the Richmond since he acquired it in the early 1990s. The courts were based there for 15 years, paying a hefty €550,000 per annum in the final years of the lease.

The old hospital was extensively modernised before the courts moved in. A new heating system was installed along with the latest electrical services, lifts, CCTV and Cat 5 cabling.

Five large courtrooms were created along with meeting rooms and suites for the judges including private kitchens, toilets and showers. Three former holding cells are expected to be used for storing valuable archives, according to Adam McCormack of the selling agent.

The court fixtures have been removed and the building, which extends to 2,029sq m (21,839sq ft), has been redecorated to appeal to new owners. Although modernised, the building still features the timber panelled, tiled entrance hall dedicated to the former hospital’s benefactors and a stair hall to the west with arches supported by tapered marble columns.

The Richmond originally formed part of a complex of three hospitals – the others were the Whitworth and Hardwick – collectively known as St Laurence’s. Developer Liam Carroll of Zoe Developments converted the Hardwick into an apartment block and built about 600 apartments in the immediate area during the property boom. He attempted but failed to buy the Richmond. The Whitworth has been owned since 2002 by the Irish Nurses’ Organisation, which uses it for meetings, training and study.

In 1994, the Richmond and the Whitworth were converted for use as business incubation centres to help deal with high unemployment in the inner city. The experiment led to the launch of a range of new enterprises which capitalised on the impressive redbrick, copper-domed Richmond to show as the address of the businesses.

The Richmond opened as a hospital in 1901 with the two wings of the U-shaped building accommodating the wards. There was one window for each bed. The double loggias at the ends of the wings allowed sheltered access to fresh air for patients. The Irish Times report on the opening, on April 22nd, 1901, boasted that it was “practically fireproof”, was fitted with modern ventilation including warmed filtered air for the theatres and “the whole building is raised from the ground upon high arches”.

Now 110 years later, Space Property Group has been looking at the likely uses that the Richmond could be put to by a new owner. These could include an office headquarters, educational or medical use, nursing home, museum, library, residential scheme or serviced offices. The agency also suggests that the building could end up as a casino.