Move allows Sigma focus on boosting value of the portfolio, including extensions to The Square Tallaght 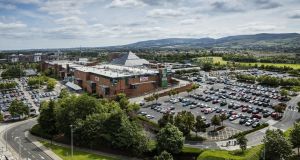 The Square Tallaght: the southwest Dublin shopping destination sits on 27 acres and extends to 580,000sq ft.

Los Angeles private equity group Oaktree and Dublin-based Sigma Retail Partners have pushed out a decision on whether to proceed with Ireland’s first retail real-estate investment trust (Reit) flotation to 2019, as they focus on developing their assets amid volatile equity markets.

The promoters of the Reit had carried out an initial exercise earlier this year with advisers in Davy to sound out market appetite for an initial public offering (IPO). However, industry sources have said it will be well into next year before a call will be made.

Ireland’s benchmark stock market index, the Iseq, has fallen by 11.5 per cent so far this year, with the decline accelerating in recent weeks amid nervousness across global equity markets. Still, while shares in Irish housebuilders Glenveagh Properties and Cairn Homes have each fallen by about 23 per cent so far this year, the country’s four Reits have outperformed the market. The worst performer in the industry, Hibernia Reit, has declined by just 5.8 per cent.

Oaktree affiliate Targeted Investment Opportunities (TIO), among the most active overseas buyers of Irish assets in the wake of the property crash, has used Sigma to manage its retail investments.

TIO’s €230 million purchase of a controlling stake in The Square shopping centre in Tallaght in Dublin from the National Asset Management Agency (Nama) in February provided the potential Reit with a “cornerstone” asset.

Sigma is led Marcus Wren, a former Nama senior retail property adviser, and Neil Bannon, a real-estate veteran who previously played a key role in the design, letting and asset management of the Dundrum Town Centre in South Dublin.

The postponement of a decision on the retail Reit IPO allows Sigma to concentrate on boosting the value of the portfolio, including extensions to The Square and Galway’s Gateway Retail Park. Market sources had originally said the Reit could IPO before the summer.

A spokeswoman for Oaktree and representatives for Sigma declined to comment.

The entire portfolio is currently valued at about €500 million and spans eight retail parks and six shopping centres.

1 FinCEN Files: Dublin business features in leak of US treasury documents
2 A look at Elon Musk’s track record ahead of Tesla’s ‘battery day’
3 The FinCEN files: Unchecked by global banks, dirty cash destroys dreams and lives
4 Aldi empire wracked by family feud
5 Chris Johns: We’re in for a triple whammy of Covid, Brexit and the US elections
6 Over 1,000 ‘money mule’ scams totalling €12m have taken place this year
7 What agriculture can learn from Charles Darwin
8 Rolls-Royce plans to raise up to £2.5bn as Covid-19 bites
9 Rupert Murdoch’s six children each to get $2bn windfall
10 Xbox Series S review: The X’s cheaper, smaller sibling
Real news has value SUBSCRIBE