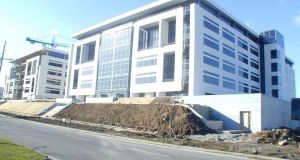 An exterior view of Green Property's near completed Atrium Office development in Sandyford.

A finance company which took over an investment loan to a businessman from the former Anglo Irish Bank is seeking summary judgment against him for €2.1 million.

Stapleford Finance Ltd is suing Sean Melly of Upper Mount Street, Dublin, over a €2 million loan to him from Anglo to invest in the Atrium Building in Sandyford Industrial Estate, Dublin.

It is also suing Michael Mareneck, with addresses at Stoneleigh, St George’s Avenue, Killiney, Co Dublin, and Fifth Avenue, New York, USA, who claims he has a beneficial interest in Mr Melly’s investment.

The case was admitted to the fast-track Commercial Court list on Monday on the application of Staplefod by Mr Justice John Hedigan.

The judge rejected arguments from Mr Melly’s counsel that Stapleford had delayed in bringing its proceedings and the matter should go through the normal High Court list.

Mr Melly is contesting Stapleford’s application for summary judgment, the judge was told.

Karen McCrave, a director of Stapleford, said in an affidavit her company acquired the €2 million loan in March 2014. The loan was secured by first legal charge over Mr Melly’s shareholding in Tysan Investments Ltd, an investment vehicle used to buy the Atrium building which she believed has since been sold, she said.

Tysan went into liquidation in July 2015 and the proceeds from that sale are now due to the shareholders, in particular Mr Melly, she said. Repayment of the loan was demanded by Stapleford, but it was not repaid.

Last June, Stapleford was informed by Mr Mareneck’s solicitor that he held a one-thirtieth share in Tysan, having invested €1 million along together with Mr Melly.  He therefore estimated his beneficial interest in the distribution rights of Tysan at €500,000.

Ms McCrave says Stapleford knows nothing about this and denies Mr Mareneck has any such entitlement.

As well as summary judgment, Stapleford seeks declarations that Mr Melly’s entire interest in Tysan is secured by its charge over the loan and it is entitled to distribution of his share rights. It also claims it has priority over Mr Mareneck’s claims for any monies payable as a result of the liquidation of the company.