Rock band gets control of building in Dublin’s Hanover Quay 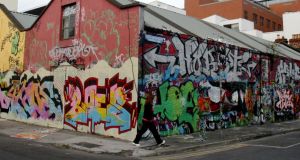 The Dublin Docklands Development Authority is selling control of a key building in the south docks to rock band U2 for about €450,000.

The authority acknowledged the sale of the freehold on No 16 Hanover Quay had not been advertised on the open market, but said it was “satisfied the sale process had achieved an open market price in line with guidance for the sale of such assets”.

The authority, which is being scrapped by the State, said auctioneers Lambert Smyth Hampton, acting on its behalf, and Jones Lang LaSalle, for U2, had brokered the deal.

U2 is understood to have an interest in the property as a music studio, which would have made it more difficult to sell it to another party.

A spokesman for U2 said: “The band’s commitment and investment in its hometown is well established.” He said he was unable to discuss the details of the transaction.

U2’s connection to Dublin’s south docklands – in the Hanover Quay building and the nearby Windmill Lane Studios – has played a role in attracting international and domestic investment to the area. The band has recorded part or all of many of its best-known albums in this part of the city.

The recently-published Grand Canal Dock planning scheme for the area specifically mentions the band in the context of being an attraction for tourists in the future.

“The U2 studios at Hanover Quay and Windmill Lane Studio for instance are part of the cultural heritage of the area and should be celebrated with new innovative tourism offering,” the scheme states.

The docklands authority originally forced the band to sell its old riverfront studio on Hanover Quay for an undisclosed price in 2002 to allow public amenity works relating to the development of the Grand Canal harbour area. The authority said it paid for the Hanover Quay building in 2004, but was not prepared to disclose the price it paid.

As part of the previous deal the band was to take the top two floors of a 32-storey tower that was being planned on an adjacent quay, a project that was subsequently put on hold.

“In the light of the authority’s imminent dissolution and the approval by An Bord Pleanála of the SDZ [a plan to encourage dockland development], the authority will no longer be pursuing a previous policy to remove, inter alia, number 16 and 18 Hanover Quay to provide access to the water body,” the authority said.