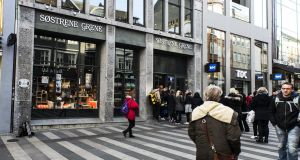 Sostrene Grene is to open its first Irish store this month

It carries what it describes as “an affordable” range of home accessories, kitchenware and hobby items.

Sostrene Grene (which translates as the Green sisters) was founded in Denmark in 1973 and now has 100 stores in that country and across Norway, Sweden, Iceland, France and Spain.

Dún Laoghaire resident Heather Lawlor, a director of the company in Ireland, says that “people will love the products and experience at Sostrene Grene as I did when I lived in Sweden”.

Shane Cahir of CBRE advised the company which is also planning to open five more stores in 2016 ranging in size from 200sq m to 300sq m. The locations include Dublin, Cork, Galway, Limerick, Sligo, Navan, Kilkenny, Waterford and Dundalk.