Dún Laoghaire is being transformed 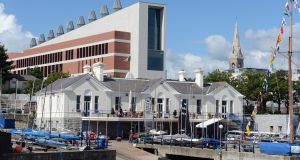 Dún Laoghaire: The contrast with the waterfront, transformed in the past few years, is stark, leading to the town being dubbed: Monaco at the front, Beirut at the back. Photograph: Eric Luke

Attempts to revive the declining fortunes of Dún Laoghaire’s town centre proposed by the Dún Laoghaire BID (Business Improvement District) company are going ahead, in spite of continued controversy over payment of levies by the town’s ratepayers. A BID property forum representing property managers, letting agents, property owners and local developers is expected to drive change in the centre of the town.

Footfall counters are being installed in smart bins on both ends of the town’s long main street, George’s Street, Marine Road, the bottom end of Patrick Street and at the People’s Park. (The counters are sensors.)

CBRE has named Danish lifestyle retailer Sostrene Grene as a new tenant on George’s Street. House, the restaurant/bar/club that operates on Leeson Street in the city centre, is to take over the Walters premises near the People’s Park.

In the next few months, BID aims to expand its online register of premises available in the town to provide information about rent and rates payable, relevant planning regulations, footfall information, grants available along with the name of the estate agent handling the letting on its website. BID also hopes agents will let it hold keys to premises, so that viewings by potential renters and buyers can be fast-tracked.

Property forum chairman Cormac Kennedy, who is Eason’s group head of property and franchise, and formerly CBRE’s head of retail, believes this proposal will find favour with letting agents. “What we are trying to do is to assist agents in letting their units but not become the agents. This would be particularly helpful where the agent is not based in the town and with diary clashes etcetera not able to get there to undertake the inspection themselves. No access would be provided without the agents/owners direct instructions, and no negotiations would be undertaken.”

Suggestions for reviving the town centre include: demarcating George’s Street, the town’s 1km long main street, into four distinct quarters; introducing a shuttle bus that would circulate every 10 minutes for 18 hours a day around the town; and introducing Dublin Bikes and more cycle lanes and better walkways. Other suggestions include providing incentives to create living-over-the-shop accommodation, or extending rates’ rebates to incentivise businesses to rejuvenate shopfronts.

BID’s proposals – a five-year plan to revive the centre of Dún Laoghaire – have been submitted for inclusion in the Dún Laoghaire-Rathdown County Council (DLRCOCO) Draft Development Plan 2016-2022, due to be adopted in March.

The row over the levies ignited again recently after non-payers received letters from debt collector Stubbs. Local councillors have voted to ask that the letters be withdrawn. However, about two-thirds of the €440,000 levy income for two years has already been collected

BID is also one of the stakeholders in the controversial plan to develop a new cruise berth facility in Dún Laoghaire harbour to cater for very large cruise ships, but this is not seen as key to boosting the town’s centre.

The main shopping street has been in decline for at least a decade, hit first by the opening of Dundrum Town Centre in 2005, then by the recession.

Expensive, hard-to-find parking and over-enthusiastic traffic wardens as well as high rates were blamed by many for retailers’ woes. The closure of Marks & Spencer Simply Food shop just over two years ago and the nearly empty top floor of Dún Laoghaire Shopping Centre in the centre of the town signalled its decline widely.

The contrast with the chic waterfront, transformed in the past few years, is stark, leading to the town being dubbed: Monaco at the front, Beirut at the back.

BID’s suggestions to revive Dún Laoghaire town centre, an area stretching from York Road to the People’s Park and from the seafront up to Patrick Street are outlined in detail in 20/20 Vision, a report commissioned by BID from retail consultancy 180 Degrees and published last April.

The proposal to demarcate the town centre into four quarters, marked visually by use of paving, seating, flowerbeds and lighting and by establishment of new town squares – eg in the space next to Bloomfield’s Tesco opposite St Michael’s Hospital – is the heart of the plan.

At 1km, George’s Street is considered too long to support viable retailing, says Derek Hughes, managing director of 180 Degrees, one of the authors of the report. There would be an interiors quarter (with mostly interiors shops) from Cumberland Street to St Michael’s Hospital on Lower George’s Street; a core retail quarter from Bloomfields Shopping Centre to Haigh Terrace, just beyond the post office; a commercial and residential quarter from Haigh Terrace to Adelphi House; and an artisan quarter with foodie, crafty and arty businesses, from Mellifont Avenue to the People’s Park on Upper George’s Street.

Some of the report’s proposals for making Dún Laoghaire a “smart town” have already been implemented: free wifi has had half a million users since last January and capacity is to be upgraded to 10GB by the end of next year, says Don McManus, managing director of family business McManus Jewellers on George’s Street.

Parking is still an issue but the average on-street parking price has dropped from €2 to €1.50 an hour, says McManus, and there has been an increase in the number of off-street car parks, including the cinema car park at the bottom of Library Road where parking costs €1 an hour.

Word up: What the traders say SHANE CAHIR . . . is CBRE’S retail director, Dublin. “BID is trying to manage the high street like a shopping centre. Getting buy-in from landlords and retailers is fundamental.”

ROBERT DOWNEY . . . is managing director of local agent Downey Property. “Over the last 12 months, we’ve let a lot of retail units up and down the street. They include a tapas restaurant, Pig & Heifer, which has opened on the corner of Cumberland Street and York Road, in premises that had been empty for three years.”

GILLIAN MAXWELL . . . is director of the Irish partner of Danish variety store Tiger, which opened the first of its 17 shops around Ireland in Dún Laoghaire Shopping Centre four years ago, says it is one of its most successful. It enjoys the best footfall per sq m in its chain, and the spend in what’s one of its smallest shops is high. “For Tiger, Dún Laoghaire is a good place to have a shop.”

GRAHAM MONGEY . . . is managing director of the Irish branch of upscale German coffee wholesaler/retailer JJ Darboven, moved in April 2014 from the Convent Road premises where his father opened the business in 1987 to a former Irish Nationwide premises opposite Penney’s in the centre of the town. Fifty varieties of coffee, 60 of tea, hot chocolate, and coffee machines are sold in the handsome shop which stands out on the street; the move has been successful. His father, who passed away in 2013, “loved Dún Laoghaire, felt it was under-appreciated; it’s always busy”.