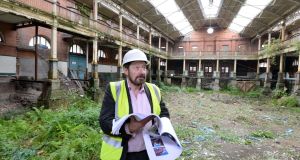 Businessman Martin Keane inside the Iveagh Markets. He is in dispute with Dublin City Council over a planning application to develop the site. Photograph: Dara Mac Dónaill

A High Court challenge has been brought against Dublin City Council’s decision to deem a planning application to redevelop the well-known Iveagh Market’s buildings in inner city Dublin as invalid.

The dispute relates to a site in Dublin’s Liberties that includes the Iveagh Markets building, which is a protected structure, and the former Mother Redcaps Market.

The markets were established in the early 20th century, but closed during the 1990s.

On the western side of the site, which mainly comprises the the Iveagh Market buildings, the developer sought permission for a distillery/brewery, together with a restaurant, deli, bakery at basement level and a 128-bedroom, four-star hotel.

On the eastern side of the alley, the applicant sought permission to develop a three-star, 148-bedroom hotel and a hostel.

On January 17th last, the council deemed the application invalid on the grounds that the applicant had insufficient legal interest in the lands that were subject to the application.

In its decision, the council said that no letter of consent from the owners of the site, which is required under the planning laws, was submitted with the application.

The council said that it owns the lands.

At a meeting before its elected members in January, the council also announced its intention to repossess the Iveagh Markets from Mr Keane. The council said it had broken off negotiations with him on the future of the listed building after he allegedly failed to show he had sufficient funds to develop the site.

At the High Court on Monday, Michael O’Donnell BL for the applicants said that the council’s claims of ownership are disputed.

Counsel said his client, who has controlled the site for many years, paid a fee of €888,816 to the council for the land in 2006, but that sum has been held on deposit.

Counsel said that it is his client’s case that the council in its decision in regards to the planning application is void, and that it has acted unreasonably.

The council, counsel added, had acted contrary to fair procedures, and had failed to give an adequate reason for its decision. The applicants also claim that the council is biased in that it allowed a material interest to be incorporated into its decision-making process.

In reply to the judge, Mr O’Donnell said the purpose of the proceedings were not so much about who owns the property but were about one party in a dispute “using the planning process to gain a commercial advantage”.

In its proceedings, the applicant seeks various orders and declarations including an order quashing the council’s decision to deem the application invalid.

The applicants also seek several declarations including that the applicant has sufficient interest in the lands, and that the council acted unreasonably and in breach of the applicant’s rights.

Permission to bring the proceedings was granted on an ex-parte basis by Mr Justice Charles Meenan. The judge adjourned the matter to a date in October.