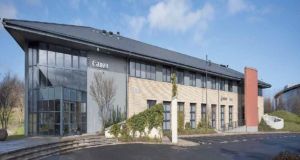 Two adjoining office buildings rented by international companies at Citywest Business Park in west Dublin have been sold for slightly over the asking price of €6.5million.

They were bought by a UK property investment company Hattington at a yield of 9.75 per cent. Duncan Lyster of Lisney handled the sale of the buildings which attracted six bidders from Ireland, Britain, Europe and Asia.

The two blocks date from 1998 and were finished to a high standard including glazed double height entrance halls, raised access floors and suspended ceilings.