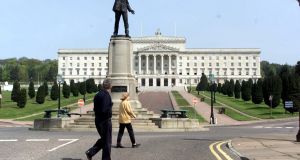 A letter from its European chief executive, Liam Strong, to the Northern Ireland Assembly’s enterprise, trade and investment committee says that by the beginning of this month, it had written €4.6 billion off the total due on the loans. Above: Stormont Parliament Buildings.

US investor Cerberus has written €4.6 billion off more than €12.5 billion in Irish property debt it bought over the last two years.

Between mid-2014 and 2015, the investment fund bought €12.5 billion worth of property debt in three deals that included its controversial Project Eagle purchase from the National Asset Management Agency (Nama).

A letter from its European chief executive, Liam Strong, to the Northern Ireland Assembly’s enterprise, trade and investment committee says that by the beginning of this month, it had written €4.6 billion off the total due on the loans.

It also states that this includes €1.6 billion written-off debts that it bought as part of Project Eagle, a portfolio of 1,600 loans totalling €6 billion to 57 borrowers based mostly in Northern Ireland.

Allegations that a group of business and political figures were to benefit from Project Eagle sparked criminal and parliamentary investigations. Cerberus has consistently denied any wrongdoing.

Its letter says that since it bought the portfolio, more than €540 million has been invested in businesses associated with it, through either sales or refinancing some of the debts.

In all, 1,300 of the properties used to secure the debts that it bought across the three portfolios were sold or the had their liabilities refinanced.

The US company maintains that its activities have boosted investor confidence and aided job creation.

Cerberus is understood to have paid €3.2 billion for the three portfolios, two of which it bought from Ulster Bank. It does not include its purchase of Project Arrow from Nama late last year through which it bought property loans totalling €6.25 billion for €800 million.

Mr Strong wrote to the enterprise committee chairman, Northern Ireland Assembly member Patsy McGlone, after Cerberus was asked to answer claims from insolvency specialist Bell &Company, that it makes unrealistic and unreasonable demands of borrowers and often threatens them with receivers.

Cerberus refused the invitation to appear before the committee. However, its letter states that it was “very concerned about the allegations and inferences” that were made before it at the hearing in January.