Brexit bounce: will Dublin’s property market benefit from the vote to leave EU? 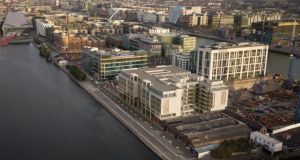 JLL estimates that there is some 706,060sq m (7.6 million sq ft) of office space either under construction or with full planning permission in Dublin 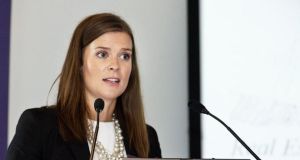 “We have seen an increase in enquiries for office space in Dublin from UK-based financial services companies,” says Hannah Dwyer, associate director and head of research at estate agent JLL 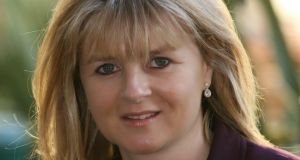 Marie Hunt, executive director and head of research at CBRE: “Interestingly, we have also been asked about locating in other Irish cities other than Dublin.”

Brexit and its implications for the Irish commercial and residential markets is very much the talk of the town in property circles.

This is because many companies are reassessing their presence in the UK after the Brexit vote. Principal among these are financial and insurance companies along with the legal services that support them.

The Law Society of Ireland has been receiving around 30 queries per day from UK-based solicitors about admission to the Irish roll of solicitors following the Brexit vote.

Some of the UK’s biggest law firms – including Freshfields, Hogan Lovells, Slaughter and May and Allen & Overy – are reported to have registered solicitors in Ireland, while international law firm Pinsent Masons has also instructed a Dublin agent to find a 929sq m (10,000sq ft) office space for it in the wake of Brexit.

What’s more, in November international law firm Kennedys will double the size of its Dublin office when it moves into 1,236sq m (13,300sq ft) of space at the Bloodstone Building on Sir John Rogerson’s Quay in the south docklands. Its move is based around an anticipated increase in business from Brexit.

To see the legal profession – rarely ones to miss an opportunity of securing first-mover advantage – heading for the exits in the wake of the Brexit vote would suggest that the writing could be on the wall for a range of UK-based business activities. This is particularly true of financial services, as firms in London use an EU passport to offer services across the bloc and few expect full access to Europe’s single market after Brexit.

Meanwhile, big hedge funds are already placing their bets as to where the chips will fall in the post-Brexit scenario. Marathon Asset Management, the US hedge fund specialising in distressed debt and property, is upping its property investments in Ireland, France, Germany and the Netherlands. In short, it’s betting that these countries will be among the big beneficiaries from companies leaving London in the next few years.

All of this could have profound implications for the Dublin office market – not to mention the residential property market – if large numbers of well-paid financial personnel start relocating to Dublin, especially as there is already a severe shortage of Grade A office accommodation in the city centre and headline rents are close to boom era peaks. There are even fears that a wave of new arrivals with big wallets could wind up banishing the natives to the outer suburbs.

“We have seen an increase in enquiries for office space in Dublin from UK-based financial services companies,” says Hannah Dwyer, associate director and head of research at estate agent JLL. “In the last two months, there have been over 10 new enquiries from companies considering a move to Dublin. Some of these are serious enquiries, and others are just scoping exercises that some occupiers are doing for Dublin and other comparable European cities. It is about 30:70 serious to just looking.”

Over at Hooke & MacDonald, Enda Moore reports “a small number of enquiries” from the UK as a result of the Brexit vote but these “are reasonably serious”. He says the companies involved are looking at Grade A space in Dublin city centre and strong suburban locations with typical requirements of 1,000sq m to 3,000sq m (10,764sq ft to 32,292sq ft) of space.

“These companies have a positive impression of Ireland but express concern about the lack of Grade A office space available and are worried about acute shortages in the residential market. While there is significant progress being made in the delivery of new office space to the market in the next 12 to 24 months, the lack of available residential rental accommodation for staff is becoming a much more pressing issue which threatens to undermine the attractiveness of Dublin from a staff retention point of view.”

Declan O’Reilly of Knight Frank gets “two to three” enquiries per week from UK firms or third parties acting for them about moving to Dublin with rental requirements from 464sq m to 9,290sq m (5,000 to 100,000sq ft). Given that it will take a couple of years for any of these companies to make their decisions and effect a move of any scale, he says that the “significant pipeline” of new office development in Dublin could cope with any influx without rents rising unduly.

JLL estimates that there is some 706,060sq m (7.6 million sq ft) of office space either under construction or with full planning permission in Dublin. However, of the 325,160sq m (3.5 million sq ft) of space under construction, 41 per cent has already been let while the city’s vacancy rate of 6.7 per cent is well below the European average of 8.6 per cent. So any Brexit boost to demand in the short term could make the market even tighter and push rents up.

However, HWBC says there is “no real evidence yet of increased inquiries from the UK” and this will only play out over the next two years “as more clarity emerges on the real implications” for British business of leaving the EU.

“We expect a number of large multinationals to run the rule over Dublin and other competing markets, such as Paris and Frankfurt, over the next 12 months, so they are ready to press the buttons on a move if required,” says HWBC’s Paul Scannell. “Some of the larger occupiers may even consider securing options on space under construction to ensure they can secure the required space in the preferred location.”

Marie Hunt, executive director and head of research at CBRE, says that enquiries from UK companies are, for now, about “getting a sense of what office supply exists and comparing the logistics and costs of locating in Dublin compared to number of other European cities”.

“Interestingly, we have also been asked about locating in other Irish cities other than Dublin. While many assume that financial services occupiers will lead the Brexit charge to Ireland, we could also see increased demand for offices from IT and tech occupiers, as most of these firms employ people from a range of different jurisdictions so they may have concerns about the ability to attract labour to the UK in the future, particularly if visa requirements are enforced.”

Roland O’Connell, chairman of Savills, says the biggest Brexit effect in Dublin may be “at the top end of the residential market” should there be a wave of relocations. “Brexit will increase demand for homes to buy and rent in Dublin,” says Mr O’Connell, “but this could prove beneficial to the city as it would encourage developers to proceed with new developments, especially of apartments, which at present they may be a little nervous about. As the demand is likely to be spread over a period of time rather than being overnight, the developers should be able to deal with this.”

Given that many UK firms are looking at Dublin and some are actively establishing a beachhead, the market dynamics of Dublin’s already tight residential and commercial property markets could change, and change rapidly once the implications of Brexit on business become clearer. So watch this space.

1 Corona beer firm reeling after 8% slide due to coronavirus
2 Digicel plots network-sharing deal amid ‘tight’ cash levels
3 Life as a Facebook moderator: ‘People are awful. This is what my job has taught me’
4 Suspicions rife as key Brexit trade talks begin in Brussels
5 How to . . . keep your kids safe playing Fortnite
6 Coronavirus: Iseq down 11% in five days as global sell-off is worst week since 2008 crisis
7 How well paid do you think you are? Here’s how to work it out
8 Has CRH done enough to silence pesky Swedish activists?
9 High time: Netherlands moves to clean up absurd cannabis policy
10 Artificial intelligence may be more humane than people
Real news has value SUBSCRIBE