Barely scraping the sky: why Dublin’s tallest buildings are too short 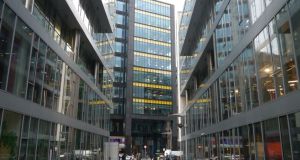 Montevetro in docklands: occupied by Google. 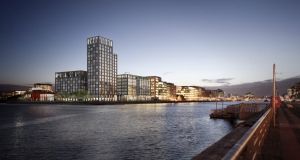 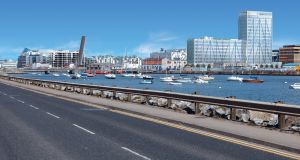 Exo, Point Village: not as high as zoning permits. 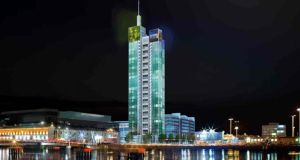 The Watchtower: 30-storey tower was planned for Point Village. 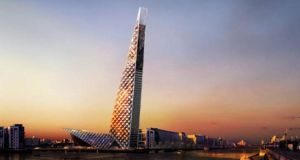 U2 Tower: fell foul of the crash. 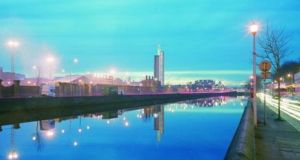 Dublin’s tallest planned office block, the 73m Exo at Point Village, recently got the green light from Dublin City Council – even though a building of 88m was permitted under zoning for the site. Across the river at Sir John Rogerson’s Quay, Kennedy Wilson is developing the Capital Dock scheme which will include a 23-storey apartment tower rising to 79m – even though, again, an 88m structure is permitted under zoning on the site.

While these developments are high by Dublin’s standards, they are considerably lower than the schemes given the go- ahead by planners on the same sites a decade ago. Back then, foundations were laid for Harry Crosbie’s “Watchtower” at Point Village which was to top out at 30 storeys – that’s 120m – while the so-called “U2 Tower” across the river was to be 130m. Both of these fell victim to the bust.

These days, given the housing crisis and chronic shortage of office space, is it not time to permit higher buildings, especially at key sites such as the above two, which are eminently suitable for skyscrapers?

“There is a case for well-designed tall buildings on certain sites in Dublin,” says Ciarán Cuffe of the Green Party, who also lectures on planning at DIT. “These sites need to be well served by public transport. But there is a far more compelling case for higher densities in Dublin rather than for high-rise. Cities such as Barcelona, Rome, Helsinki, Paris and Berlin are distinguished by their high densities of development, but most of these cities are only six floors high, and the high-rise element is generally limited to small parts of the city.”

David O’Connor, who also lectures on planning at DIT, says it is “not surprising” that developers are building below permitted heights at the docklands sites mentioned above.

“Tall buildings are expensive and take too long to deliver,” he says. “There are a lot of media commentators blaming the lack of housing supply on overly restrictive planning regulations but our planning restrictions are the lightest in Europe and yet we have this [housing] problem. However, allowing taller buildings will not help at all. The real problem [for development] is finance, as the hangover from the crash remains, and an over-reliance on private initiative to deliver what is essentially a social good.”

The Society of Chartered Surveyors Ireland (SCSI) says curbs on height in suburban Dublin, where development is typically not allowed above four storeys, present more difficulties for development than high-rise in the city centre. “Restricting building heights to under four storeys, while still needing lifts and basement parking, presents significant challenges for development and financial viability. This has the potential to undermine sustainable density policies,” according to the SCSI.

One issue holding back high-rise offices in Dublin city centre is the limited number of firms which could occupy a 50m-plus block. Montevetro, a 16-storey office building at Grand Canal Dock, is occupied by Google, which employs some 2,500 at Barrow Street. But not many employers in the city are on this scale. “The Dublin market has yet to develop experience of multi-tenancy high buildings,” the SCSI says.

However, the IDA points out that a key part of how it attracts large-scale business services activity to Dublin is through the availability of suitable property.

“Large-scale employers in the city centre include Google, Citi, Facebook, BNY Mellon and LinkedIn, and companies of this size all need large office spaces,” says an IDA spokesman. “For the IDA to continue to win large companies into Dublin, we need suitable commercial districts for them to locate. Large multinationals want to move into buildings where they have the scale to expand if necessary – these are exactly the types of companies that the IDA want to attract.”

Ross Shorten of Lisney believes the desire to preserve Dublin as a low-rise city is no longer viable. “Tall buildings must be encouraged in more, but also suitable, locations,” he says. “The typical 50m restrictions in docklands, George’s Quay and around Connolly and Heuston stations are too low. There is appetite among developers to build much higher buildings on certain sites. Of course each building will throw up a differing viability and valuation appraisal scenario. We think that height should be allowed throughout the docklands – particularly further east.”

Other estate agents point to “a major missed opportunity” to build tall buildings and higher densities during the boom years, particularly in the docklands. “We pretty much have a uniform height level across the entire [docklands] waterfront which makes for a pretty uninteresting skyline,” says Declan O’Reilly of Knight Frank. “Taller buildings should be allowed and Dublin as a city needs these type of buildings to help attract international occupiers who are used to these type of buildings in other global centres.”

So what high-rise schemes are on the cards for Dublin? The Boland’s Quay scheme at the former Boland’s Mills site on Barrow Street in the south docklands is moving towards a September start on construction of its three towers which will max out at 53m.

At Tara Street station, a company controlled by the Ronan Property Group is likely to apply for planning permission for a tower of 22 storeys with offices and possibly a hotel too. The application is not lodged yet but the company has until 2021 to build out the site. “It is highly likely to be built out,” says Ross Shorten.

Across the river, Siptu’s plans to redevelop Liberty Hall have stalled after An Bord Pleanála turned down a November 2012 application to replace the union HQ with a 22-storey structure rising to 100m.

A 32-storey residential tower on a site owned by the Office of Public Works near Heuston Station has also been pigeonholed. It was planned on a site between Dr Steevens’ Hospital and the Royal Hospital Kilmainham and was designed by Paul Keogh architects.