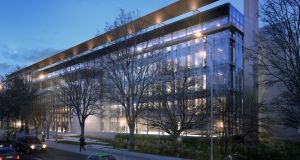 Graphic showing proposed Vertium Building, beside the former Burlington Hotel in Dublin 4, whose first tenants will be retailer Amazon

The online retail giant Amazon has agreed in principle to rent a high density office building under construction beside the former Burlington Hotel – now known as DoubleTree by Hilton Dublin. The letting will be by far the largest in Dublin for several years.

Amazon has agreed a blended rent in the region of €50 per sq ft – ranging from €45 at basement office level to €55 on the upper floors. The six-storey over double basement block will extend to 15,992sq m (172,000sq ft) and will be ready to move into next April or May. The new tenants will have a break option in year 13 and the use of 95 car parking spaces at lower basement level.

Amazon already occupies more than 9,754sq m (105,000sq ft) at nearby Burlington Plaza where they share that building with Sky and Adroll. The company is also fitting out the former Irish Nationwide headquarters at Grand Canal Parade with the intention of renting it on a short-term basis. That 3,948sq m (43,500sq ft) building was bought at the end of 2013 by London & Regional Properties for €13 million and is expected to be offered for sale again later this year.

Amazon’s decision to move into the hugely spacious Burlington Road block, to be known as the Vertium Building, will signify a further expansion of its Dublin operation which already has a workforce of more than 1,400.

Roland O’Connell of Savills and Declan O’Reilly of Knight Frank, who are handling the Dublin letting, are precluded from making any comment at this stage.

The €40.5 million Burlington Road site had full planning permission for the office scheme when it was acquired in June, 2014, by developer Johnny Ronan in a joint venture with U+I (formerly Development Securities), Paddy McKillen and Colony Capital.

The development company has already agreed terms for the sale of the completed office project to Union Investment Real Estate, Germany’s largest investment management company. The future owner is understood to have favoured a realistic rather than a high initial rent to allow the investment to show an improved return and capital appreciation over the next five years. The same fund bought two office buildings occupied by Facebook at Grand Canal Square for €232 million over a year ago.

The eye catching building, designed by Paul O’Brien of Henry J Lyons, will have larger than usual floorplates averaging around 2,694 sq m (29,000sq ft). It will also have a large double height central entrance lobby and a central bank of 21 passenger lifts.

The site was previously occupied by a 1980s office block half the size of the one about to replace it. Owners Allianz Insurance sold it in 2007 to developer Bernard McNamara for €105 million.