A coffee community oasis, and not an unsmiling barista in sight 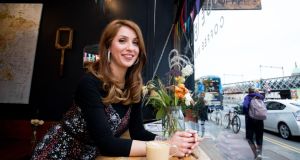 Jane Lunnon at Shoe Lane: ‘Some artisan coffee shops are intimidating – we’ve never wanted that. From day one we’ve been artisans who serve any kind of coffee.’ Photograph: Tom Honan

Shoe Lane Coffee is a community oasis, a place to meet and, above all, enjoy good coffee served with pleasure.

The wood-soaked, hand-made decor, convivial staff, intimate feel and music all help. And the business came about in the best of possible ways: a meeting of like souls followed by the putting together of a long-time dream on the shoe-strings of hope, a prayer and a lot of hard work.

“We became part of the family/community around here pretty quickly,” says Jane Lunnon, one half of the Shoe Lane Coffee partnership. “I don’t know if that’s because we attracted lovely people or if it’s because the area was already full of lovely people.”

The area is Tara Street (once Shoe Lane) south of the quays, that ever-busy, ever up-and-coming, couldn’t-be-more-central part of the capital.

“I’d been toying with the idea of a coffee shop for years,” Jonathan (Jono) Hughes, the other half of the partnership, explains. “I’d bought all sorts of coffee house bits and pieces, stored them away. This place became available and I decided to set up. It started as a pop-up.” That was in July 2016. “It would have stayed a pop-up too,” he adds, “if Jane hadn’t become involved.”

Both Dubs, Lunnon and Hughes are “partners in crime and life”, in business and in love and are, she says, “besties”. They’ve been together three years – after meeting, appropriately enough, in a Dalkey restaurant Jane was managing when Jono arrived to install the venue’s Christmas decorations.

Nothing they’d done before indicated their lives would converge. Lunnon studied art history and Spanish at UCD, went travelling and got a background in and a liking for catering in New Zealand. Hughes says he’s a “Jack-of-all-trades. Makes life more interesting. I like a new project every so often.”

He brings energy and creativity into Shoe Lane. “Jono built the whole shop,” Lunnon says, “I do the day-to-day running of things. He’s the brains behind a lot of it. He built it from salvage timber, starting off with the counter and ground floor, replacing the floor, everything. The shelves have the original nails, a nice detail.”

Undaunted, they went on. “Almost immediately it became more than a pop-up,” Hughes says. “It’s really buzzy around here. Creativity is rife! We’re beside The Tara Building (a coworking and creative workspace), so its people come in here. New places are opening; the area’s really bubbling up.” He points across Tara Street, where a giant squirrel made from waste was erected on a building wall by Portuguese artist, Artur Bordalo.

Altogether, Shoe Lane Coffee seats about 35. The decorating style is eclectic: a comic wall-papered toilet, moody upstairs walls, mirrors, pictures, fresh flowers from The Crate florists every Monday. “We play different music every day,” Lunnon says, “on a record player upstairs, where we’ve put in a chill-out space with window seats and a big table. We were constantly being asked if we’d seating upstairs, so Jono got more wood and we went for it. We play reggae, jazz, soul, 1920s stuff.

“Some artisan coffee shops are intimidating – we’ve never wanted that. From day one we’ve been artisans who serve any kind of coffee. We get cool young customers, but we get suits too – everybody, all ages.”

There’s a transparency about Shoe Lane. A wall map of the world – another Jono Hughes creation – shows where the coffee is sourced for their espressos (Tanzania), filter (Burundi) and decaf (Congo). Their orange juice comes from South Africa and their roaster/supplier is Full Circle.

“We’d a really basic coffee-making machine to begin with and some roasters didn’t want to talk to us,” Hughes says. “We didn’t meet Brian and Dave’s Full Circle criteria either, but promised, and did, get a good machine within three months.” They got a La Marzocco FB70.

“People are always on the hunt for a good coffee shop,” Lunnon says. “We do anything people want – iced, mochas, seasonal drinks like Aztec hot chocolate, which people love.” They also sell local artisan cakes, including gluten-free, salads, wraps and healthy breakfast pots.

Their notably good-humoured and efficient staff of six are stayers, and as eclectic as the Shoe Lane Coffee decor. Laura (a Dub) arrived on day one, recommended by Full Circle. Juliana (from Brazil) came to them early on as well. Since they have signed on Polly, who is English, Eva from Australia, Tereza from Prague and Niamh from Co Louth.

“We don’t hire baristas,” Lunnon says. “We hire people with an interest in coffee and personalities and train them. Some have expertise, others learn. We do take-away paper cups and glass cups for everyone else.”

“Working for yourself means you have to be prepared to work,” Hughes says, “but that gives you flexibility.” Lunnon agrees. “It’s the same with any business, plus you have to lead by example.” And yes, there are plans to expand. But not until next year – and they’re not saying where.