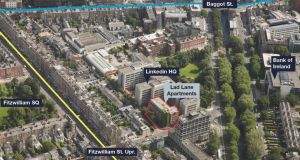 A 30-year-old apartment block going for sale today at Lad Lane in Dublin’s south inner city will likely either be upgraded and extended or replaced by a new development when it is sold shortly by private treaty.

John Swarbrigg of Savills is inviting offers in excess of €10 million for the Lad Lane Apartments, 25 one-bedroom units and 15 two-bedroom homes which are let on a single four-year lease from August, 2012.

The apartments were originally built by the late PV Doyle of the Doyle hotel group and subsequently sold to Treasury Holdings. The block extends to 3,252sq m (35,000sq ft) and adjoins 37 surface car parking spaces. The entire property stands on 0.39 of an acre and because of its prime location in the city’s central business district might well be considered for redevelopment as offices. Neighbouring offices are occupied by Linkedin, IDA Ireland and a number of embassies.

If the apartments are to be retained, the next owners will undoubtedly embark on a much needed refurbishment and possibly extend the block.

Swarbrigg said there was potential to almost double the income stream by upgrading the apartments. He also suggested that whoever buys the Lad Lane Apartments might also consider capitalising on the current shortage of offices in Dublin 2 by developing a stand-alone block.

The apartments previously formed part of Project Plum, a portfolio of 588 apartments, which was offered for sale by Nama last October. The Lad Lane investment was dropped from the sale possibly because unlike the five other developments it dated back to the 1980s.

Swarbrigg said there was already considerable interest in Lad Lane, most notably from parties who previously inspected the complex but had felt that even though it formed part of a larger portfolio it had greater potential to trade as a single asset.