€1.5m for Dublin city centre site with scope for hotel 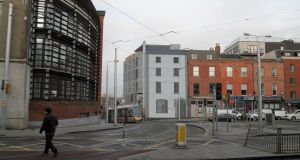 Diageo’s recent selection of Sean Mulryan’s Ballymore as development partner for the 12.6-acre Guinness Quarter at its St James’s Gate brewery, coupled with the wider regeneration currently under way in Dublin 8, should help to drive the sale of No 134 James’s Street.

The property, built in the 1750s, comprises a two-bay, four-storey over-basement building that had up until recently been in use as a music rehearsal studio.

The site, in a prominent end-of-terrace position, extends to about 0.0268 hectares (0.066 acres). The existing building (incorporating rear extension) extends to 484.92sq m (5,220sq ft) and benefits from a right of way to the rear of the return over the adjoining site and on to Steeven’s Lane.

The property is being offered to the market by QRE Real Estate Advisers at a guide price of €1.5 million.

In terms of its potential, plans lodged by the vendor with Dublin City Council are seeking permission for the conservation, refurbishment, redevelopment and change of use of the building to provide a 20-bedroom hotel. Should the planning application be approved, the purchaser would be in a position to demolish the existing two-storey building to the rear and replace it with a six-storey building over lower-ground floor annex with rooftop cafe and two glazed link bridges over two floors to No 134 James Street.

The timing of the sale is interesting, given Cushman & Wakefield’s recent marketing of the site immediately to the rear of No 134 James’s Street at a guide price of €8 million. A feasibility study prepared for the site on Steeven’s Lane indicates its potential to accommodate a 124-unit apartment scheme or a 266-bedroom hotel.

Were an individual purchaser to acquire both the James’s Street and Steeven’s Lane sites, Bryan Garry and Conor Whelan of QRE say it would provide an opportunity to pursue an enhanced development on a high-profile site with frontage on to both streets.