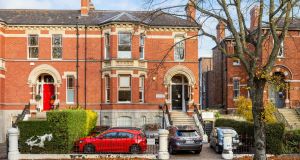 The property is a two-storey over garden level end-of-terrace Victorian building of 468sq m (5,040sq ft), with parking for up to six cars

The sale of what is arguably one of the most interesting, if not historic buildings in Dublin 4 is expected to attract strong interest from investors looking to secure a property that offers immediate income and significant reversionary potential.

Guiding at a price of €2.5 million through agent Colliers International, number 58 Northumberland Road occupies a prime position in Dublin’s most affluent area, and is within walking distance of Ballsbridge, the city centre and the south docklands.

The property comprises a two-storey over garden level end-of-terrace Victorian building of 468sq m (5,040sq ft), with parking for up to six cars, and a large east-facing rear garden.

There is a tenant break option on March 1st, 2028, providing 6.5 years of guaranteed income to the break option and 20 years to the expiration of the lease. Dental Care Ireland operates a network of 14 established dental practices, located throughout the country.

The upper floors of the property extend to a total area of 1,715sq ft and are vacant currently. The accommodation comprises large bright rooms with high ceilings which the selling agent says would make for an impressive residence or alternatively offices or medical use, subject to the appropriate planning permission. The conversion of this space for commercial purposes would substantially increase the subject property’s overall rent roll.

Those with an interest in history meanwhile will note number 58’s role as the headquarters of the German legation, or embassy in Ireland during the second World War.

It was to this house that Éamon de Valera was reported at the time by both The Irish Times and the Irish Press to have called when Hitler’s death was announced. However, given the reference in these reports to the then Taoiseach's visit having taken place "last evening", some historians believe it is more likely that de Valera visited the German ambassador, Eduard Hempel, at his home in Dun Laoghaire as opposed to the legation on Northumberland Road.

Aware of the controversy this would generate, the then taoiseach said at the time: “I have noted that my call on the German minister on the announcement of Hitler’s death was played up to the utmost. I expected this. I could have had a diplomatic illness but, as you know, I would scorn that sort of thing . . . so long as we retain our diplomatic relations with Germany, to have failed to call upon the German representative would have been an act of unpardonable discourtesy to the German nation.”

Number 58 was also associated with more than a little war-time intrigue, with locals noting how the flower pots placed on the legation’s window sills came in for frequent, unexpected rearrangement. The combinations and permutations were believed, rightly or wrongly, to have been a code system which the Germans allegedly used to communicate with the Irish underground.

Michele McGarry of Colliers International says: “The security of the income until 2028, with a fixed rental uplift from Northumberland Dental Care in 2025, provides excellent security of income, coupled with a blank canvas on the upper floors. This should appeal to investors and owner occupiers alike with the opportunity to convert this substantial property back to a family home in the long term.”