Church of Scientology donations up 76% in Ireland 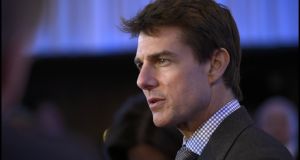 Hollywood star Tom Cruise: actor is among the high-profile names associated with the Church of Scientology. Photograph: Brenda Fitzsimons

Donations to the Church of Scientology in Ireland increased by 76 per cent last year, newly-filed accounts show.

The organisation, which lists its principal activities as “the operation of a church and the provision of religious services”, recorded a full-year deficit after providing for depreciation of €19. This compared with a deficit of €35,594 in 2014.

The Church of Scientology, which has a number of high-profile celebrity members, such as actors John Travolta and Tom Cruise (above), was established by the American science fiction writer L Ron Hubbard in the 1950s.

Its Irish headquarters are on Middle Abbey Street in Dublin. The organisation said its members’ fund in Ireland showed a deficit of €173,088.

In terms of possible risks that might impact on the company’s financial position, the directors listed “uncertainty of continued services due to general society problems”.