Chain reaction: what started Fadó, Fadó in Atlanta is now a $40m company 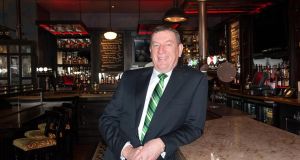 Kieran McGill’s chain of 16 Irish pubs in the US employs: almost 700 people and has an annual turnover of $40 million

When Kieran McGill told his late mother in 1996 that he was leaving a comfortable well-paid consultancy job at a Dublin accountancy practice to start an Irish pub chain in the United States, she was horrified.

Pubs run in the family. His father owned the Maid of Erin pub on Marlborough Street. Next to the Pro Cathedral, it was better known as the Confession Box. McGill’s mother’s abiding memory was of her father being awoken at 3am at the family home in Dalkey, in south Co Dublin, two hours after arriving home from the pub, because the pub’s burglar alarm was going off and him having to drive back into the city.

“The pub business is where you came from not where you are going,” she told him.

Two decades since leaving his job at Oliver Freaney & Co accountants in Dublin, McGill is the majority owner and chief executive of Fadó Pubs, a nationwide chain of Irish bars across the US that he runs from his base in Atlanta, Georgia.

He has 11 Fadó pubs, including the one he is sitting in during our interview in downtown Washington DC. They are spread across the country, from Miami to Seattle, and from Austin, Texas, to Philadelphia.

“It seemed like a good idea at the time,” he says, with a smile.

He also owns four pubs under the Tigín name – in Stamford, Connecticut; St Louis, Missouri and two in airports, at JFK in New York and Dallas-Forth Worth.

He also has the Confession Box in Miami. It’s more than three decades since he worked as a teenager behind his father’s bar. McGill loved the name so much he wanted it for one of his own bars.

A few days before our meeting, McGill opened his second Fadó in the same city with a new pub in midtown Atlanta, a bar that is close to the modern, trendy Irish pub you would find in cosmopolitan Dublin.

On opening day, the place was packed. McGill timed the opening perfectly, coinciding it with the St Patrick’s Day parade passing on the street out front and the visit of Taoiseach Enda Kenny who ducked in for a pint to watch the first half of the Ireland-Wales rugby game before performing his duties as the parade’s grand marshal.

A day earlier, the manager of the new Fadó in Atlanta was giving out keys to the new pub.

McGill opened his first Fadó in Atlanta in 1996, just a few months before the city hosted that year’s Olympics. He picked Atlanta for two reasons.

He wanted to set up in a place from which he could travel easily. Atlanta was a hub for Delta and one of only four places in the US at the time that had direct flights from Ireland. McGill wanted to remain living in Ireland; he had no intention of relocating his family. Being in the same timezone as the US east-coast time made it a little easier to run a major new business from Ireland.

The other reason? “We wanted to do it in a city that wasn’t Irish because we wanted to prove it worked. We felt that if we did it in Boston or New York, it would be like, ‘So what? You have a successful Irish pub in Boston,’ ” says McGill, speaking in his low Dublin accent, tinged with the occasional American intonation.

“The concept was: there were a lot of Irish pubs in the US, and by and large we didn’t think very much of the quality. They were sort of plastic shamrock kind of pubs and mostly appealed to expat Irish or Irish-American. We wanted to do for Irish pubs what Riverdance did for Irish music. We wanted to bring it into the present day. We wanted it to be for a broader population, a broader demographic.”

McGill and his partners looked at the top 25 cities by population in the US and set about trying to open at least one pub in each.

The aim was to “establish a credible brand” that wouldn’t just work in Irish cities like New York or Chicago, he says, but could work in any city in America. “And it does – it works well.”

Starting off in 1996 in the US with no credit record was a potential nightmare. McGill was warned by a property agent he might need a large cash guarantee to encourage a landlord to lease a property.

In the end, he didn’t need one. He met the landlord of a property he liked in Atlanta and his Irish-American attorney who “loved everything Irish”. A business meeting extended to dinner, then to a few drinks in a bar, and then to something of a pub crawl to check out different bars.

“We basically spent the night together and at the end of the night I dropped them off in a taxi,” says McGill. “We shook hands and they said we are really looking forward to doing business.”

That was the start of it. He struggled with a name that might translate easily. They toyed with “Seanachaí” but didn’t think Americans would be able to pronounce it. They thought about spelling it phonetically, as Shanakee. Then one day in the office McGill was talking about a story and recalled how Irish stories started with Fadó Fadó.

In his accountancy days, McGill did a lot of business with Anglo Irish and ICC as the companies he advised grew.

As the pub business grew, McGill convinced his family to move over to the US, initially for two years. That was 16 years ago and since then he, his wife and their two children have become US citizens.

He is still looking to expand the business. They are looking at a second location in Washington DC and a possible third pub in Atlanta. Charleston in South Carolina and Nashville are also on his radar. It costs about $2 million to open a new pub.

The aim is to continuing growing the business to sustain itself so that it can invest in new opportunities for the benefit of long-serving staff among his close to 700-strong workforce.

“We are kind of at that point where we have to open new ones to create opportunities for employees to grow, even just to keep our own excitement going,” he says.

What about opening in those Irish-American cities he initially tried to avoid?

“I think we will do New York,” he says, adding that he almost did a deal on a property in Manhattan. “I don’t know about Boston. It is very well served by pubs. Boston had 25 feet of snow this winter – I really only want to open pubs in cities that I want to visit.”

McGill has just come out of his busiest period: the week around St Patrick’s Day. His pubs enjoy a double whammy of sales – on parade days, usually the Saturday before the feast day, and on St Patrick’s Day itself. Those two days alone account for about three weeks’ worth of business for his pubs at any other time of year.

Where he can, McGill expands the pubs to outdoor events. In Denver, Fadó does a big outdoor event at its location next to the Coors Field baseball stadium. “We do more business there over the week of St Patrick’s than we do for the entire months of January, February and the rest of March,” he says.

Given the transcontinental nature of his business, McGill has a good vantage point to know the hardest and easiest places in which to do business in the US. The pubs in Atlanta, Miami and Washington DC are his busiest. The west coast is most difficult, he says.

“We are not in California and don’t really want to be,” he says. “There are just so many rules and regulations, and taxes and employee costs are higher.”

Bar and restaurant staff are typically paid $4 to $5 an hour on the east coast but make substantially more in tips, an average between 15 and 25 per cent of the customer bill. The hourly wage on the west coast is $10 before tips.

McGill is opposed to US president Barack Obama’s plans to raise the national minimum wage to $10.10 an hour.

“It will hurt business, certainly the restaurant business,” he says. “It will increase costs. The fact is this is tipping culture. Our employees do very well. It is okay for an industry that doesn’t have tips.”

In seeking to offer an authentic Irish pub experience, McGill tries his best to bring Irish students over on short-term J-1 visas but he says it’s “really difficult” to get Irish people in the absence of an overhaul of the country’s banjaxed immigration laws, an initiative that is mired in the poisonous political bickering of Washington.

Still, McGill’s march across America continues unabated. He believes he can continue opening up bars at the same rate he has been growing. He has considered expanding his pub business beyond American shores to his native city.

“What we do could be quite successful in Ireland,” he says. “There is a tremendous revolution going on in the pub business in Ireland. I think people who recognise what a difference this millennial generation are making, those that are embracing that are doing very well.”

And what about opening near his father’s old stomping ground around the Pro Cathedral? “I don’t know about Marlborough Street,” he says. CV Name: Kieran McGill

Family: married to Louise with a daughter Laura and a son Stephen

Something you might expect: McGill’s American pub chain is one of Guinness’s top three corporate customers in North America

Something that might surprise: he was once Delta’s second-highest travelling customer in Ireland because of the amount of air travel he did around the US from his home when he lived in Ireland between 1996 and 1999. The business got him a place on Seve Ballesteros’s Delta team at the Irish Open Pro-Am at Druid’s Glen in 1999. He is a Delta Airlines gold customer for life with two million air miles.