Caveat: Donohoe runs shy of own advice on women directors 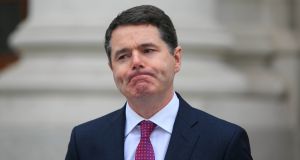 Paschal Donohoe, our surprisingly bookish Minister for Finance, was busy fiercely channelling his inner Emmanuel Macron this week. Like the French president, it seems Donohoe is rather fond of philosophy. It certainly puts his boss, Leo Varadkar’s cartoon socks fetish in the intellectual shade.

On Wednesday, the minister wrote a piece for the opinion pages of The Irish Times about how he finds inspiration in the writings of the late Russian-British pointy-headed political philosopher, Isaiah Berlin. It was interesting and enlightening stuff. Allegedly, the Healy-Raes have even asked for a translation to be sent to Kerry.

In his piece, Donohoe correctly warned of the dangers of political dogma. He also warned about the “sweeping grandeur of the simple solution”. On the latter point, however, the Minister is in clear and present danger of not heeding his own advice, particularly on the issue of women directors on company boards.

The issue of lower participation rates for female directors must be properly analysed to ensure that the gender element of board diversity is correctly addressed. Everybody – men and women – wants to solve this. Not just for good corporate governance. But because it’s about bloody time. We just need to find the most effective way.

Many commentators appear to accept the prevailing dogma that says there is one main, simple cause for lower female participation rates – sexism on the part of men who make most of the appointments. Others, including Donohoe, then fall for the allure of the sweeping grandeur of a simple solution: just set a higher percentage target for recruitment of women directors and hope for the best.

But when you drill deeper into board appointment figures prepared for the Government in which Donohoe serves, it becomes blatantly apparent that one of the biggest reasons for the lower participation rates of female directors is, in reality, that far too few women volunteer themselves for board positions. There are many other factors, of course, such as the effect of motherhood on careers, but this female shyness also has to be addressed just as urgently as the issue of male sexism.

On Wednesday morning, right at the same time that his erudite, philosophical opinion piece was being closely read at breakfast tables across Dublin 4 and parts of west Cork, Donohoe was in Dublin’s Westbury hotel launching a revised guide by Mazars and the Institute of Directors (IoD), Governance for Directors on State Boards.

But some particularly well-diversified State boards appear to be skewing the total. The government target for State boards is that they all should be 40 per cent female. Less than half of State companies meet this quota. Yet, Donohoe still called to raise the target to 45 per cent, as if targets are all that are required to solve the issue.

Changes in behaviour are more urgently required. From men, of course – that train is already moving, and the changing tone of public discourse is the proof. But changes in behaviour are also urgently required from women. Figures from the Public Appointments Service show that, between July and September this year, almost twice as many men (530) as women (271) applied for State board directorships.

The women are coming from behind, they are 2-1 down at half-time. If they want to catch up without waiting an age for it to happen, simple mathematics dictates that they are going to have to reverse the current proportion, and become twice as numerous as men when it comes to making applications.

This change in culture, to put themselves forward more often than men, resides within the gift of women themselves – they don’t need any man to step aside for them to do this. That surely makes it a more empowering option than quotas to fix the final score.

The roughly two-to-one ratio of State board applications in favour of men appears consistent across each quarter outlined in the PAS figures, which are buried in a barely legible format on its website.

The good news for women is that the figures, at least for the most recent quarter, appear to show that although fewer women apply, the quality of female applicants is statistically slightly better than men. Of the men who applied via PAS, 9.2 per cent were deemed suitable (though not necessarily appointed). Of the women who applied, that figure was 10.3 per cent.

That’s not a huge difference, but it’s enough to torpedo any notion that women are not good enough. It’s just that not enough of them apply. Until that changes, the problem won’t be sustainably solved, unless you make it extremely hard for any qualified man to be appointed until such time as the scoreline is fixed. Two wrongs, etc.

I’m not saying that quotas or targets have no role to play – the far better numbers for State boards, versus the private sector, clearly demonstrate that targets help. Nor am I saying that male sexism is not an issue – perhaps indirectly, it may even be the cause of the female shyness I mentioned before. It just isn’t the only issue. There are many.

It is much more sustainable to build from the bottom up (partly through more women pushing themselves forward), than from the top down (rigid quotas to fix the result).

IT’S NOT just Donohoe who is taking inspiration from the French. Some Irish business figures are also in a Gallic mood.

One of them, Amarenco founder and former Bord Gáis chief John Mullins is doing so while staring at the sun.

Mullins flew to Paris yesterday to pick up an award for solar company, Amarenco, as the firm that is contributing most to French-Irish trade.

Le gong is presented annually by the France Ireland Chamber of Commerce and Network Irlande, with the ceremony alternating each year between the two countries.

Amarenco, which develops solar farms, has invested €300 million in France over the last three years, and recently expanded by merging its French operation with those of local solar operator Group Carré.

It has even been tapping the crowdfunding sector for cash to build solar farms.

Isn’t it well for some, I hear you say. Sure, haven’t they plenty of sunshine to be farming in France?

Well, Mullins reckons that Amarenco also has €100 million ready to invest in solar farms in cloudy old Ireland, as long as the State brings in supportive tariffs. (I checked to see if Mullins had a temperature, but he didn’t. Apparently, the technology exists to build solar panels capable of working in our dog rough weather).

AND FOR another French-inspired item, there is apparently a shortage of foie gras on the cards this Christmas.

According to reports this week, stocks of the bird liver delicacy are running dangerously low in France after the second year in a row of avian flu, which has resulted in widespread culling of ducks and geese.

The locals, who gobble tonnes of the stuff, are horrified. To hell with the French: how on earth will they cope in Ballsbridge?

7 Boxever bought by US firm Sitecore in multimillion-euro deal