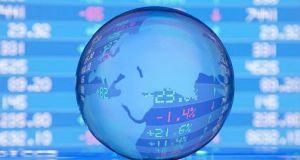 It is unsurprising that a flash look at European consumer confidence earlier this month found levels had “plummeted” by five points in the euro zone and by 4.5 points across the wider EU. Photograph: Getty Images

It is unsurprising that a flash look at European consumer confidence earlier this month found levels had “plummeted” by five points in the euro zone and by 4.5 points across the wider EU. Full results for the euro zone business and consumer surveys are to be published on Monday, and, as is now the norm, they will tell the story of coronavirus and its disruption to global economies.

As if that were not ominous enough, it qualified the flash report by noting that “only approximately 15 per cent of consumers’ responses were collected after strict confinement measures were taken in the individual countries”.

In the weeks ahead a dearth of corporate news means that the focus is going to be on various economic indicators, particularly in Ireland and the EU. This is not only because events and company activities have been hugely disrupted by the Covid-19 crisis, but because the consequences will be reflected most acutely in economic data.

On Tuesday. for instance, the Central Statistics Office is due to report on Irish unemployment for March. For a long time employment, a key indicator on the health of Irish society, has been surging upward with much of the commentary around when the State would hit the so-called “zero unemployment” rate. The situation today could not be more stark in terms of juxtaposition.

People have been forced out of employment rapidly in recent weeks, with the ESRI last week warning that the labour market is set to face the largest shock in a single quarter in living memory – with the unemployment rate soaring potentially to 18 per cent.

How will March compare to February? For that month the CSO reported the seasonally adjusted unemployment rate at a very healthy 4.8 per cent, unchanged from January and down from 5 per cent in February 2019.

Ireland created about 330,000 jobs in the last five years, an impressive measure of economic muscle. However, Neil Gibson, economist at EY Ireland, recently told the Financial Times that the State could see as many as 350,000 people out of work as a consequence of the ongoing public health crisis. Much of the hurt has been felt in the shuttered childcare sector, hospitality and, most recently, retail following the closure of “non-essential” shops.

That ESRI report said the Irish economy will fall into recession with a potential contraction of over 7 per cent in GDP. This scenario will be illustrated in various economic data in the weeks ahead.

1 Michael Smurfit: ‘I asked Trump to invite me to the White House for my 80th birthday’
2 Household savings soar as consumers stop spending
3 ‘I’m so lucky to be in the Caribbean – a million miles from Derry Girls’
4 Small businesses are cannon fodder in zealous anti-virus experiment
5 ‘Never mind GDP; the most fundamental job of any leader is to keep his people alive’
6 ‘The recovery needs to be a full-scale economic renewal’
7 Iput secures €200m in ‘green finance’ for delivery of new LinkedIn HQ
8 ‘It’s safe to fly’, EU aviation safety boss says
9 Tax and the Pandemic Unemployment Payment: Your questions answered
10 Irish business of Carluccio’s restaurants to be wound up
Real news has value SUBSCRIBE