Building the blocks that make up the world’s blockbuster games

Thanks to the ‘halo effect’, leading innovators have helped to turn Ireland into a major gaming hub 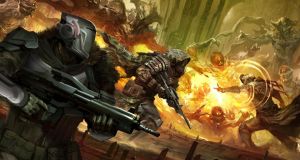 Vast arenas, countless characters, immersive music and some adherence to the laws of physics are the vital components of a modern AAA gaming title.

Translating that to the screen is a time-consuming process which is dependent on complex code and careful craft. This has led to an intricate ‘halo’ industry being developed around games makers to help them in their task – and it’s an industry in which lreland is very well represented.

“Art creation is one of the few fields that has gone into the computer era without getting any of the benefits from the computer era,” says Eric Risser, founder of Artomatix.

“It’s still in the Middle Ages – back then people painted things with wooden sticks, now they paint them with plastic sticks.”

Artomatix, which Risser founded with Neal O’Gorman, aims to reduce this burden by simplifying the mass production of artwork.

Users can input a small number of examples – say a few different faces – and the programme will automatically create any number of unique variants from them. This removes the need for an artist to individually model each item, while also avoiding the compromise of duplicating a handful of drawings ad nauseam.

“We want the artist to focus on the creative side and not the tedious side – we’ll look after that,” said O’Gorman.

Artomatix is a new company, but its product is already proving compelling to leading studios. Following a recent trip to the US, its owners are confident the tool will be used in the production of some high-profile games in the near future.

In doing so it will follow a well-worn path of Irish firms supporting big game development.

A pioneer in this field is Steve Collins and Hugh Reynolds’ Havok, which was established in 1998 to make in-game physics more realistic.

Some 16 years later and following a multi-million-euro acquisition by Intel, Havok’s software continues to be part of many major games titles – including most recently Bungie’s sci-fi epic Destiny.

“I think timing was everything,” said Collins, who is now chief technical officer at mobile marketing platform Swrve. “We happened to hit the right idea at the right time, and luck is always the biggest part of these stories retrospectively.”

Trinity College Dublin, where Collins and Reynolds were researchers, was also extremely supportive of their work, he said, allowing them the space to pursue the initial idea.

“I think a number of companies have maybe gotten the confidence that it’s possible to do something simply because Havok has managed to,” Collins said.

Where Havok led the way, companies like Demonware – founded by Dylan Collins and Sean Blanchfield – followed.

Today others, including Artomatix, still benefit from the legacy of these pioneers, with their founders guiding those trying to break into the field.

“I can’t stress enough how important those guys have been,” said Risser. “We’ve hit that critical mass where anybody new coming to the space like us has that support system. They have guys that are very helpful and willing to take time out of their days to say, ‘here’s what you should and shouldn’t do, I’ll open a few doors’.”

Active support aside, O’Gorman says these companies have made it easier for them to prosper simply because they were based in Ireland.

“The knock-on benefit to us because of that is that there are people in Dublin who have the ideal skill set that we want to hire,” he said.

But the Irish connection to gaming’s halo industry is not limited to the middleware tools that add features to games; it is also embedded in the areas that add depth to the finished article.

Irishman Rob Keenan has made a career in Los Angeles through scene-setting - creating the environments and worlds in which games are set.

Over the past decade he has worked for Pandemic Games, Electronic Arts and Sony Entertainment, helping to develop tools that will build detailed worlds faster and more efficiently.

More recently, he has gone on to full-blown games development, working as art director for mobile-focused Seismic Games.

Meanwhile Galway-born composer Eimear Noone has forged a career working on game scores and soundtracks.

But despite being a leading figure in the industry, Noone admits gaming was not an obvious choice for her as a music student. In fact, it was not even on her radar as a potential career path.

“When I was coming up through school and college, this job really didn’t exist yet because the engines that were driving the games didn’t have the capability of supporting it,” she said.

That changed when she gained a credit largely by accident on Konami’s Metal Gear Solid.

She has since gone to work on numerous titles, including Diablo III and World of Warcraft, and also recently toured the world with a symphony based on Nintendo’s Zelda series.

At the moment, Noone is organising the Dublin International Gaming Music Festival for April 2015, which will showcase the best of the global industry over a three-day period.

“We want to be able bring over American developers as well as the music side,” she said. “We want it to be a celebratory, fun space where people can come together and actually have business happen in a very organic way.”

Established by Steve Collins and Hugh Reynolds as the Image Synthesis Group in 1993, the research body has helped members to delve into projects and – in many cases – turn them into successful businesses.

“When we became post-graduate researchers, we were initially independently supported by the Department of Computer Science,” said Collins. “We then created a group, brought together some like-minded people and started bringing in some research funds, largely speaking from Forfás. It was actually one of those research projects that ultimately spun out into the company that became Havok.”

GV2 continues to be a launchpad for promising spin-outs, including games developers like Blue Bear and Haunted Planet.

Other members have gone on to take up roles in industry, such as Carol O’Sullivan, who studied the interactions of virtual ‘crowds’ before becoming a leading researcher for Disney.

But the group’s work goes far beyond gaming and animation, with many projects having an application in a variety of fields.

“It’s not all about games; we basically do underlying technologies,” said Michael Manzke, assistant professor in computer science at TCD. “We do also a lot of serious stuff, especially in graphics and in vision.”

Manzke points to the work of Gerard Lacey as an example, which includes WingWatch, a system that mounts on an aeroplane wing to reduce collisions, and SureWash, a camera-connected hand sanitiser that ensures medical staff are washing their hands properly.

While the work being done at GV2 is strictly speaking academic, both Collins and Manzke also point to its commercial potential.

That potential is such that Science Foundation Ireland (SFI) is currently seeking a research professor of creative technologies for the group, offering a €5 million budget to conduct research until 2020.

Manzke believes this vote of confidence is warranted, as the ever-changing landscape of computing presents a new set of challenges to those involved.

“It’s a very attractive offer and it’s really meant for stellar kind of researchers, to attract some really good people,” Manzke said. “It’s a sign that SFI – and also the college – puts a real emphasis on that.”