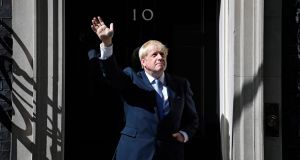 UK prime minister Boris Johnson is determined to lead Britain out of the EU before facing an election.

There were rumours this week that British prime minister Boris Johnson – hell bent on leading Britain out of the EU before he faces the electorate – might schedule an election for the day after Brexit in order to thwart attempts to foil a no-deal departure.

The faction in the House of Commons trying to prevent a no-deal scenario is planning to hold a confidence vote in Johnson when parliament returns in September as a means to try and unseat him before the UK is due to leave on October 31st.

If Johnson is defeated he would have 14 days to win another vote of confidence or, if no other government could be formed, face a general election. However, there are reports Johnson could seek to hang on long enough to hold the election on November 1st.

That would mean the UK would find itself in the midst of an election campaign with no sitting MPs on or in the lead up to October 31st to stop Johnson. The UK would simply fall out of the bloc, with or without a deal.

Labour leader Jeremy Corbyn said such a scenario would be an “unprecedented, unconstitutional and an anti-democratic abuse of power”.

Retailers such as Tesco have warned that a disorderly Brexit would be hugely problematic for the industry as much of the fresh produce is imported and warehouses are stocked full ahead of Christmas. Fresh produce would be left to rot in lorries.

The industry has also tested different ports to avoid the main route of Dover-Calais while pharmaceutical companies have reserved space on airlines to fly in supplies if needed.

A meeting between Taoiseach Leo Varadkar and Mr Johnson is being organised as London again insisted the backstop must be scrapped. But, even if the UK crashes out, Varadkar said that finding “a solution” to the Border would be a priority in talks for a trade deal.

Meanwhile, companies in the Republic that need to take on staff to cope with new customs formalities will be able to access financial support. The Government’s Clear Customs scheme offers a six-week free training course and up to €6,000 per trainee.

Brexit aside, other international headwinds this week included the deepening trade war between the United States and China. The US treasury provocatively labelled China a currency manipulator.

Harland and Wolff looks to be sunk

The shipyard where the Titanic was built edged closer to going the way of its most famous export this week as Harland and Wolff officially entered administration.

Renowned for its 300 foot cranes – named Samson and Goliath after two of the Old Testament figures of brute size and strength – the company is now in the hands of administrators from business advisory firm BDO Northern Ireland.

BDO confirmed that a buyer had not been found for the stricken shipyard and that it had been “unable to continue trading due to having insufficient funds following the recent insolvency of its ultimate parent”.

It was a rough week for a number of companies. Cardboard box maker Smurfit Kappa Group said its Italian unit was fined €124 million as authorities in the country found that 50 paper and packaging groups had engaged in anti-competitive practices.

Then there’s Ryanair which these days seems to be in constant fire fighting mode. It is taking legal action against outgoing chief operations officer and long-time Michael O’Leary associate Peter Bellew who was recently poached by rival airline Easyjet.

The details of the action are not officially know, but O’Leary pointed out to investors this week that all Ryanair senior managers’ contracts barred them from working for rival airlines for periods after leaving the company.

The airline is also facing growing industrial unrest. Pilots in the UK are to strike in a dispute over pay, while pilots in Ireland voted overwhelmingly to support industrial action over similar concerns. Portuguese cabin crew are pursuing separate claims.

Within days of the calls for a strike in Portugal, Ryanair decided to close its base at Faro International Airport in the south of the country from next year with the loss of at least 120 jobs.

Investors in Ryanair, whose stock has fallen almost 15 per cent so far this year, are also said to be “highly sceptical” about the carrier’s ability to deliver a rebound in fares in the second six months of its financial year to the end of next March.

Another company on the ropes is oil and gas explorer Providence Resources, led by chief executive Tony O’Reilly jnr, which reported its cash level has dwindled to $1.45 million (€1.3 million).

The company said it would have to put “alternative financing arrangements” in place to fund itself beyond the end of August if $10 million (€8.9 million) it is owed from the Chinese backer of its Barryroe project off the coast of Cork is not received by then.

It also decided to make all its technical and support staff redundant, with its technical director John O’Sullivan leaving with immediate effect. It is understood that they account for 10 of the company’s 13 staff.

In better news for Providence, it secured permission from the Government to carry out an important site survey at its Barryroe oil project off the Cork coast that would pave the way for drilling at the field.