Behind the scenes at Lidl's €1m re-education meeting in Dublin

Caveat: Nearly 5,000 staff from across Ireland attend US-style gathering on how they may change their approach 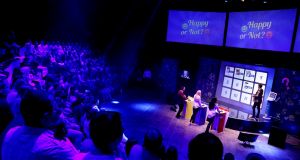 Lidl staff members take part in a quiz show as part of a large multi-day event in which the German supermarket chain launched a new approach to customer service.

Lidl might be viewed as a quintessentially austere German discount supermarket chain, but there was a touch of Hollywood about the glitzy staff convention it held in Dublin’s Citywest conference centre this week.

Over five days beginning last Saturday, every single one of Lidl’s 4,971 staff from all corners of the island were bussed to the Dublin venue for a half-day customer service re-education camp. The event might have been American in tone, but it was still brilliantly German in its logistical efficiency.

Lidl now has a 12 per cent share of the grocery market in the State and 5.4 per cent up North. It has set its sights on breaching the 20 per cent barrier in the Republic in coming years. Its directors, who haven’t a grey hair between them and look more like a boyband than a board, told the convention a perceived lack of customer service is holding it back.

The supermarket chain has embarked upon on a mission to change its service culture, and the Citywest bash was its attempt to press the reset button on standards. “We are Lidl” was the motto of the highly structured event. Sounding just as determined as the Borg, they might as well have added “resistance is futile”.

The Citywest gathering was split into nine separate sessions over the five days, with more than 500 Lidl staff at each session. Each seminar began with an upbeat group address. Lidl’s senior managers, led by chief executive John Paul Scally, strode energetically about the stage wearing earpieces and microphones, commanding applause and working the crowd to a soundtrack of dance beats.

If Tony Quinn threw in the towel on motivational speaking and entered the supermarkets game, this is what it might look like. The event felt partly like a US political convention, part deep-South evangelical sermon, and part corporate training exercise. But it was almost totally surreal. And more than a little fun.

It started with a video narrated in a Hollywood cinema voice, who preached that today’s world is “mad: mad colourful, mad different, mad fast, mad diverse . . . simply mad”. Then Scally, who only turned 34 this year, took to the stage to announce Lidl Ireland is making a strategic pivot: “What will we keep and what will we change?”

One by one, the group’s most senior managers, including human resources director Maeve McCleane and commercial director Liam Casey joined Scally on stage. Punctuated by whoops and applause from the floor, they warmed the crowd with effusive praise about Lidl’s growth and culture.

Then a Waterford Whispers News article appeared on the huge screen behind the stage: “Dozens injured in stampede as second checkout opens in Lidl”.

“It’s satire,” said Casey. “But sometimes satire jumps up to bite you. It is based on reality. Our customers think we are excellent on price and quality, but not so hot on customer service.”

“We need a gear change,” interjected Scally, working his way to up to his punchline. “We need to redesign things so that the customer is at the heart of everything we do. We have a new obsession: making every customer smile.”

Scally acknowledged that it is a new departure for a discount retailer to build a service model to help it drive further growth. He insisted, however, that its new strategy will win over customers and help it steal a march on its competitors.

Divided in to three

The group was then split into three – the blues, reds and yellows of Lidl’s corporate logo – with each sent off to a differently themed part of the conference, before being rotated in turn until everybody had been through every minutely planned section. I joined the blues, along with the genial Scally and a few other senior managers.

First stop was the “work safe, live well” section, where Lidl’s director of central services, Alan Barry, led proceedings. Staff were rotated through a series of safety and wellness demonstrations. They were told all staff would use electric pallet trucks from next spring. All Lidl staff uniforms will also change from the beginning of October. New policies and training initiatives are also in train.

The second part was a customer service session, delivered using the device of a mock, cheesy 1980s quiz show hosted by broadcaster Aidan Power. It was a bit like Going for Gold, only with questions about supermarket standards. Tongue-in-cheek, kitschy, over-the-top fun. The staff lapped it up.

They were then told “store assistants” are to be renamed “customer assistants”, and by next month, each Lidl outlet will have a “happy or not” customer survey kiosk.

The final section focused on reinforcing aspects of Lidl’s corporate culture, the launch of the #wearelidl hashtag and, for some reason, a group effort at the Macarena. Then all staff were brought back together to complete a domino challenge, before being ushered out and on to buses back home.

The entire event is understood to have cost Lidl more than €1 million – that is the price of pressing the reset button on standards.

Can a previously austere German discounter change its customer service spots? Shoppers will find out next month.

I hear veteran stockbroker Liam Boggan has departed from Cantor Fitzgerald, which is headed up in Ireland by his old pal, Ronan Reid.

Boggan, who returned to Dublin from London to work for Cantor two years ago, was the head of its institutional equities department, giving him the rank of managing director. His role mainly involved distributing Cantor’s market strategy and equity research products to institutions in Ireland and Europe. In today’s tough market, that must have been a tough sell lately.

He was previously head of international equities and head of research with Merrion, and also worked for ABN Amro, Riada and Montgomery Govett. He worked the leanest years of the crash in London for State Street.

Boggan is the second senior Cantor staffer to leave recently, after Investec hired Owen Callan to join its finance research team. Analysts are in hot demand in the Dublin stockbroking scene.

No word yet on where Boggan is due to pop up next, but no doubt he will be busy.

- Another veteran of the Irish corporate scene is also on the move. British-born Stephen Brewer, who was chief executive of Vodafone Ireland’s precursor, Eircell, for six years until 2001, has been retained by the Department of Communications as an adviser on the National Broadband Plan.

Brewer has swanned around the consultancy and advisory circuit for most of the past decade, after a stint running Denis O’Brien’s Caribbean telco, Digicel and also its rival, Cable & Wireless. He has also advised Enterprise Ireland on helping start-ups.

His new role with the department will see him advise the communications department on how to, well, communicate its plan to award contracts to roll out high-speed services deep into rural Ireland.

Some of Brewer’s old charges at what is now Vodafone Ireland are in the hunt, as part of the Siro joint venture with ESB. Eir remains the favourite, while E-Net also fancies its chances.

- What an interesting story on Newstalk radio this week, with Heineken confirming that some of its products were mislabelled and sold to unsuspecting customers in some locations as local craft beers.

“We apologise to our valued consumers and customers. This should not have happened. Heineken Ireland has appointed an external firm to investigate and help us understand how this occurred and to prevent it happening again,” it told Newstalk.

Fake vodka in former hurler’s bars, fake craft brews . . . Can we not even trust the provenance of our gargle these days?

1 Why is Germany suddenly embracing its inner Keynesian?
2 Aer Lingus confirms job cuts due to ‘decimation in demand’
3 Passengers face queuing in car parks at Dublin Airport
4 Domestic economy may get boost from multinationals
5 Tesco to cut emissions by converting waste food from Irish stores to gas
6 Prospect of foreign travel highlights remaining restrictions here
7 In six months we will be in the grip of a 1980s-style recession
8 Revenue tells court it was entitled to raise €1.64bn tax assessment against Perrigo
9 Ikea among major retailers to reopen next week
10 Major credit union plans to limit savings accounts to €40,000
Real news has value SUBSCRIBE